Ulster hit top spot in the United Rugby Championship after running in seven tries to ease past Cardiff 48-12 at the Kingspan Stadium and register their sixth-straight win in all competitions.

Ulster took seven minutes to get on the scoreboard when Billy Burns’ cross-kick was picked up by Baloucoune, who scorched the scrambling Cardiff cover to score with Nathan Doak converting.

Doak then made it 10-0, five minutes later, after Willis Halaholo was sinbinned by referee Holly Davidson.

Ulster then scored their second try when Hume intercepted a Jarrod Evans pass and ran in from his own 22 to score under the posts, with Doak again converting.

From defence to attack in an instant!

After Cardiff blew a great chance to score when Josh Turnbull knocked on, the half ended with Ulster claiming their third try from McCloskey on the stroke of half-time but this time, Doak failed to convert.

The visitors finally got off the mark when Myhill was put clear by Matthew Screech though Evans, who began the move, missed the conversion.

Three minutes later, Ulster celebrated their try bonus when Timoney used his power to drive through with Doak again converting and – after 53 minutes – Baloucoune claimed his second score of the night after a burst from Stewart Moore as John Cooney added the extras.

Try number six was scored by substitute Sexton just after the hour with Cooney failing to convert but he was successful after Stewart claimed number seven.

Ratti then crashed over late on for Cardiff with Thomas converting and the game ended with a length-of-the-field Hume try being ruled out for a forward pass. 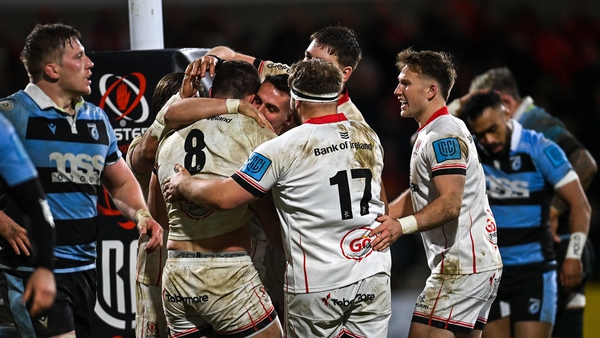