Leinster's James Ryan says he had moved on from the disappointment of missing out on the British and Irish Lions Tour.

The second row was passed over by head coach Warren Gatland when he announced his squad back in May, having previously seen to be a nailed-on tourist by most pundits.

Eyebrows were also raised when Adam Beard was chosen over Ryan following an injury to Alun-Wyn Jones. At the time, an abductor injury was revealed to have cost Ryan the late call-up, only for him to return to action with Ireland a few days later.

Speaking on Tuesday afternoon ahead of Sunday's United Rugby Championship game away to the Dragons (live on RTÉ2 and RTÉ Player), the 25-year-old seemed in no mood to dwell on the frustrating summer.

Ryan admitted his disappointment at having missed out on the squad, but said he is eager to move on.

"I was disappointed at the time, yeah," he told reporters.

"It feels like a long time ago now, so at this stage I'm only really looking forward, and as I said it's such an exciting season this year to look forward to.

"Delighted to be in the last few weeks and looking forward to hopefully getting stuck in again this week.

"No, I'm not interested in ruminating or anything, I'm just looking forward now and looking to get better as a player."

Back in April, Gatland referenced Leinster's Heineken Champions Cup defeat to La Rochelle when asked about Ryan's omission from the touring party. 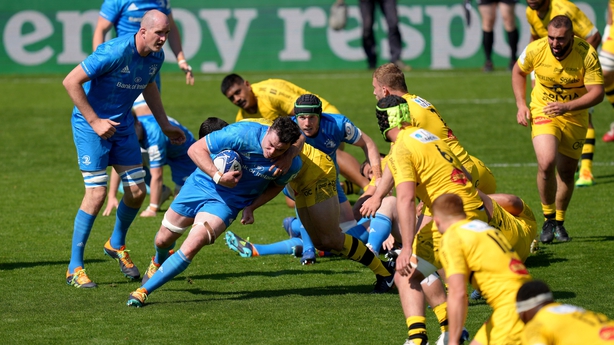 Critics of the stand-in Ireland captain said he and his team-mates had been physically dominated against the French side.

Asked if he has something to prove this season, Ryan said the new campaign is no different to any other.

"Every season is a big season for me to be honest but I'm really excited about this season," he said.

"The new United Rugby Championship has the nuts and bolts of being a really exciting competition and with the European Cup back this year with fans, and being an international year I'm looking forward to attacking it as well as I can.

"I'm always trying to keep growing, keep progressing my work in the set-piece, and then I suppose part of being a lock at this level it's the nuts and bolts of the ruck, carry, tackle, always looking to keep getting better, to keep getting dominant in those areas."

Leinster enjoyed the perfect start to the URC on Saturday with a bonus-point 31-3 win against the Vodacom Bulls at the Aviva Stadium.

The defending champions put the newcomers to the sword, reminding the rest of the URC why they are the reigning four-in-a-row champions.

Ryan says they took a lot of satisfaction in how they dictated the pace of the game.

"One thing we were happy with was the speed that we played at.

"We knew just how big and physical the Bulls were, that we wanted to try and play quick, but to do that our ruck needed to be early, it needed to be aggressive so we could play on top of them and I thought we did that quite well.

"I thought our set-piece was another positive that we took from the game, which is always an important part of playing big power-based teams."