Andy Farrell says there was a line of communication between himself and Warren Gatland over James Ryan but admitted that the Ireland international's abductor injury this weekend was an untimely "setback" which derailed the second row's hopes of a late call-up to the British & Irish Lions squad.

The Leinster player had been a doubt for Ireland's test against Japan due to the injury but has "surprised everyone with the speed of his recovery" according to the Ireland head coach and will captain a much-changed Irish side at the Aviva Stadium on Saturday.

Ryan, who had missed out on 2021 Lions selection, had been briefly speculated to be an option to replace original tour captain Alun Wyn Jones after the Wales second row was ruled out of the series after suffering a dislocated shoulder in a test against the Japanese last Saturday.

Speaking ahead of Saturday's test against Japan, Farrell said that there had been communication between himself and Gatland and emphasised that his Lions counterpart rates Ryan highly.

"Myself and Warren have communicated quite a lot and obviously I know that Warren really rates James," he said.

"But the injury was a little bit of a setback towards the end of next week and we didn't quite know where we were up to with that and then the medics took over and I think James over the last day or so has surprised everyone with the speed of the recovery."

Farrell said that he had "informed (Gatland) that there was something going on and then the medics took over from there" but added that he did not know whether Ryan would have ultimately received a Lions call or not if he had been fully fit at the time of Jones' injury.

While his recovery from injury came at an inopportune time for his Lions hopes, Ryan will get to captain Ireland once again and Farrell says he had future leadership in mind in offering the Leinster player more opportunities to lead the team out at test level.

"It's something he's passionate about. He's had two goes at it and he's learned from those experiences and we've seen him lead the side very well over the last 10 days so we're delighted that our captain has made great progress and is able to join us," Farrell said.

"Hopefully that will stand to us down the years as well as far as the captaincy and the leadership is concerned."

While Ryan stands in as Ireland captain in the absence of the rested Johnny Sexton, another of Farrell's experienced international campaigners got the nod to captain the Lions with Conor Murray stepping up to the plate once Jones was ruled out of the tour to South Africa.

"I was delighted for him," Farrell said of Murray's elevation.

"There's no better man. You can see within the dynamics of the Jersey camp of how Conor would be at the forefront just because of his personality.

"He attracts people around him, not because he's loud or boisterous, but just because he's a good bloke and the experience that he's got on the last few tours and the ups and downs that he's had throughout his career will stand him in great stead. I'm sure he'll do a fine job."

Describing Japan as a "formidable side" with six weeks of preparation behind them compared to Ireland's 12 days, he added that his selection of his strongest available team at his disposal in this international window is a reflection of the respect he has for them.

"We need to be respectful to ourselves. This is a proper test match. We're playing against a top class side in Japan," he said.

"We all know the last time that we played them and we've since seen the two games that they've had against the Sunwolves and the Lions. They're a formidable side that's very experienced and we obviously need to respect them but we also need to respect ourselves first and foremost." 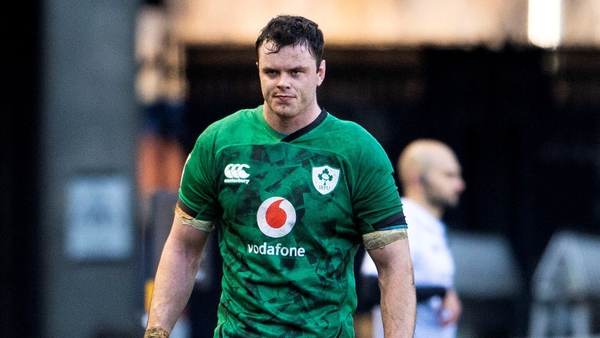