The 22-year-old was man of the match against the Cell C Sharks in Saturday's United Rugby Championship opener, following on from a breakthrough campaign last season.

The Limerick man played 19 times and scored four tries en route to being named Young Player of the Season at the province, with international recognition following when he made his Test debut against Italy in the Six Nations in Rome.

In the last 12 months, Casey has emerged as the consensus long-term replacement for Conor Murray at Munster, and potentially even in the Ireland shirt.

The province's senior coach Larkham says Casey's growing influence has not come as a surprise.

"I've only been here for a couple of years and I've always seen the same side of Craig," Larkham said.

"Very diligent with all of his off-field work, prepared extremely well for field sessions and games and it was kind of inevitable that he would get his opportunity.

"He's played for his nation now and he's played exceptionally well for us and I think the diligence he's shown off the field has resulted in what's happened on the field for him." 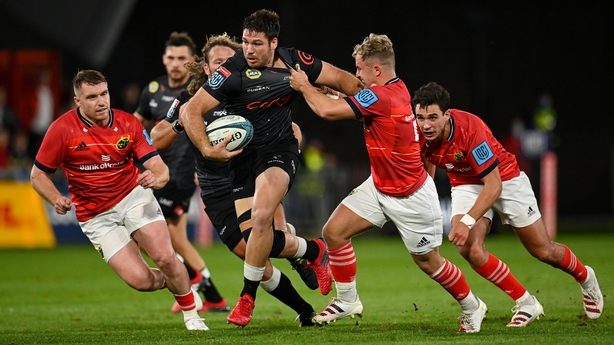 Listed as 5ft 5in tall, Casey's bullishness on the pitch has always been in stark contract to his physical appearance. He's noticeably one of the most vocal on the pitch, while he's thus far shown no indication of struggling with an increasingly physically game.

Larkham specifically referenced the Shannon man's leadership abilities, but remained coy when asked if Casey was "a future Munster captain in waiting".

"Potentially, he's got the right mindset for it (captaincy)," Larkham told RTÉ Sport.

"He's becoming a natural leader in the team because he's so driven and passionate about winning every week."

While the apprentice was playing a starring role in the URC opener against the Sharks, the master was an observer.

Conor Murray's Lions commitments means he (and Tadhg Beirne) remain unavailable for this weekend's visit of another South African franchise, the DHL Stormers (live on RTÉ2 and RTÉ Player). 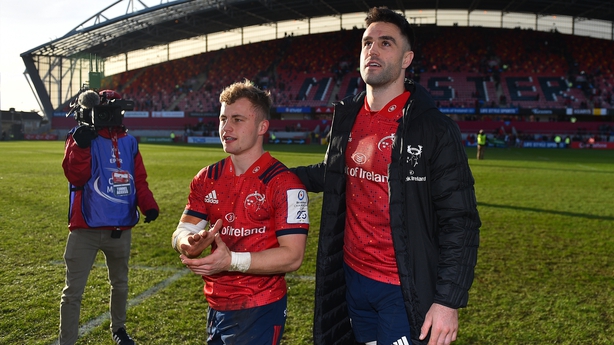 The likelihood is that Casey will have the No 9 shirt to himself in the opening rounds of the season.

However, Larkham batted off the suggestion that Murray will have a fight to reclaim that jersey upon his return.

"Well we'll give everyone a chance to play, as you saw last weekend we're trying to get our national team players back into the team and get that combination going again.

"Murr (Murray) at the moment is just coming back from that Lions series and won't be available for selection this week but he'll get his chance when he comes back in.

"There's good competition across the board, I wouldn't say Craig has secured his spot or Conor's not going to get his spot back, we'll make a decision every week when it comes to selection."

Meanwhile, the Australian has also said he hopes to stay at the province beyond this season.

His contract, along with those of the rest of the Munster coaching team, is set to expire in June 2022, with reports last week that they had been offered extensions.

And while no details of negotiations have been made public, Larkham made it clear when asked if he wanted to stay in Limerick for another term.

"Of course, we all do (want to stay), it's a great environment here at the moment," he said.

"We certainly feel as though things are building in the right direction, we had a really good year last year and we want that to continue, we have a really good cohesion as a coaching group at the moment, we're really enjoying it.

"From a playing perspective, it's our third year together as a larger group so the environment's great at the moment."