It took exactly five minutes and 45 seconds for Simon Zebo bring the noise.

From there, Munster never looked back.

As opening nights go, it wasn't far off perfect; Zebo returning in red and bookending the night with tries, RG Snyman back on the pitch after 13 cursed months, fans flowing through the Thomond terraces, and a bonus point 42-17 win in the can.

At some point this season Munster's path will diverge and the campaign will go one way or the other, tonight was about enjoying the moment.

Stand Up and Fight rarely sounded better, more than 10,000 fans embracing what they had missed for 18 months. The only danger was they'd be worn out by kick-off.

The Sharks brought it to Munster early on though, controlling possession, dominating territory and winning the gainline battle.

They could have lead inside three minutes, but Curwin Bosch's penalty from just outside the 22 drifted right and wide.

And then the moment every fan at Thomond Park was waiting for, not just for the 18 months they had been locked out of the stands, but for nearly three-and-a-half-years. 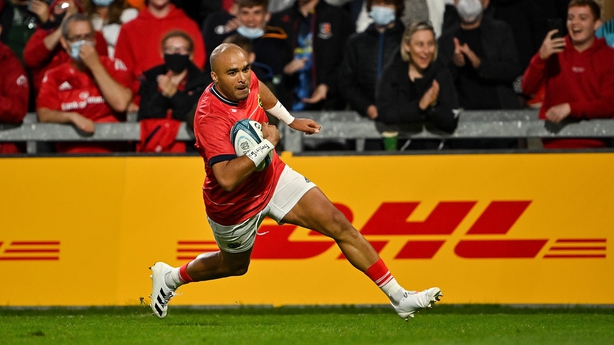 Attacking the Munster 22, out-half Boeta Chamberlain drove wide right before throwing a loose offload towards the wing. The Sharks' second row Le Roux Roets was asleep at the wheel, watching the ball roll towards the touchline.

Zebo was awake , and pounced. By the time the Sharks realised he had the ball, he had a 10 metre head start. His sprint down the line was soundtracked by delirious fans, slowing to a jog as he curved towards the posts, soaking up every second of what felt like a genuinely special moment.

Many players have worn the Munster red down the years, but only a select few have had the ability to generate that noise from a Thomond Park crowd. Zebo had them on a string, and many probably still had their eyes fixed on him as Joey Carbery was sending the conversion wide.

For a time, the game struggled to catch up with itself after such a brilliant early moment, and the home side plodded their way through the first quarter. They dealt with a very eager Sharks team, slowly working their way into the contest.

By the half-hour mark, Munster were firmly in control, and extended their lead to 8-0 when Carbery slotted a routine penalty after the Sharks' former prop Thomas du Toit was yellow carded.

A Bosch penalty shortly after was just reward for the Sharks, but in the nine minutes that followed they conceded this contest. 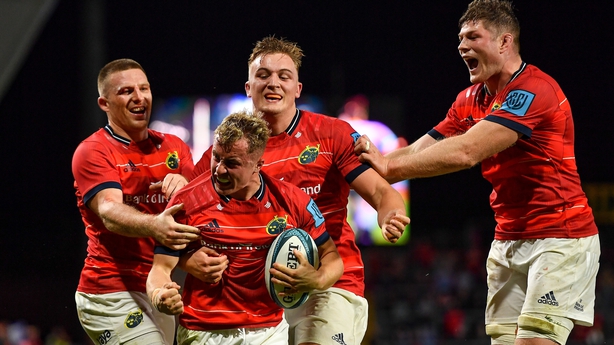 First, Craig Casey darted off the back of a five metre scrum, selling a neat dummy before diving across the line to get his side's second try of the game.

And then with the clock in the red, another Zebo jaunt down the left wing led to a penalty on the half way line. Carbery kicked for territory, pinning it deep in Sharks territory. A second penalty followed soon after, before Gavin Coombes picked up where he left off in July with Ireland, crashing over for a try.

Carbery converted the score, and Munster were roared down the tunnel with a 20-3 lead.

Coombes scored a whopping 15 tries last season, and by the 51st minute at Thomond Park he was on his second for this campaign, wrapping up the bonus point with a close-range pick-and-go that was almost identical to his first.

Carbery's conversion split the posts, but his mixed night was summed up five minutes later when his looping pass was intercepted by Chamberlain, who ran in for the Sharks opening try.

If there was a moment that could have rivalled Zebo's early try, it arrived with 15 minutes to play, as RG Snyman jogged onto the pitch for just his second Munster appearance.

The South African World Cup winner was finally on the pitch again after a hellish year of injury, the cushion of a 17-point lead easing any pressure that would have come with it.

With Munster tiring, Ben Healy stretched the lead out to 20 with what is now a trademark long-range penalty, before the Sharks crossed for their second try, Chamberlain's lovely pass out the back door sending Yaw Penxe in under the posts.

It made the score 30-17, but with 10 minutes to play it would never spark a comeback, and there was still time for Munster to bag their fifth try of the night, as Chris Cloete burrowed over.

That looked to be it, but Zebo wasn't finished, and it could only have been him to land on the end of Dan Goggin's grubber to the corner, dotting down his second try as the clock reached 80. 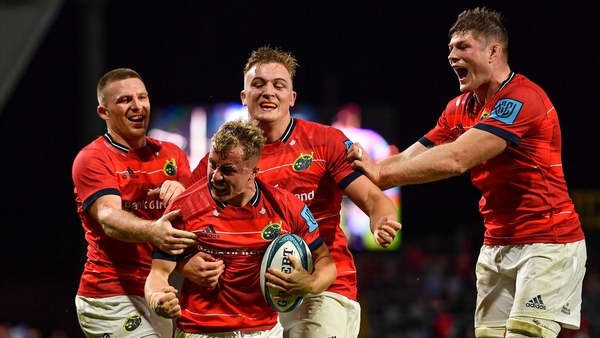