Niamh Fahey and Jamie Finn are back in the Republic of Ireland squad for next month's World Cup play-off but Vera Pauw is without some important players for the crunch showdown.

Fahey and Finn both missed the win over Slovakia that ensured Ireland finished second in Group A. Their subsequent return to full fitness is an obvious boost, however Pauw's plans have been disrupted by some unfortunate luck on the injury front.

Earlier this month, striker Leanne Kiernan was ruled out of the play-off after sustaining a bad ankle injury during Liverpool's Women's Super League win against Chelsea.

That blow was compounded by the loss of Wexford Youths' talented teenage attacker Molloy who suffered a knee injury last weekend. Both players came off the bench in Ireland's 1-0 win in Slovakia.

The versatile Megan Connolly is still recovering from the fractured ribs and a bruised kidney she suffered in the 1-0 home victory over Finland, while midfielder Ruesha Littlejohn had to go off early in that game due to a foot problem which has not yet fully healed.

In more positive news, Fahey returns having missed the Finland and Slovakia matches with a groin problem, Finn is back, and Niamh Farrelly, Roma McLaughlin, Izzy Atkinson and Kyra Carusa come into the fold among a 28-woman squad.

Katie McCabe also came through Arsenal's domestic and European exploits unscathed. McCabe helped the Gunners seal a place in the Champions League group stages midweek with a 1-0 win away to Ajax.

The Ireland players will report into camp this Tuesday, and will depart Dublin on Sunday 9 October. Destination: Glasgow or Vienna.

Scotland face Austria at Hampden Park in the first-round play-off on Thursday, 6 October with the winner progressing to a mammoth showdown with the Girls in Green five days later. 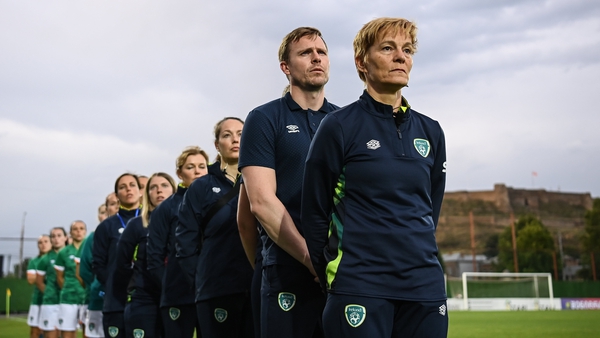 'No fear' for Ireland as Vera Pauw plots play-off plan