Stephen Kenny is not looking at Ireland's 3-0 victory over Scotland as the blueprint for repeating the feat at Hampden Park on Saturday night.

The two sides met in June at the Aviva Stadium in their UEFA Nations League group with Ireland running out 3-0 winners, looking comfortably better that the Scots for the majority of the match.

Goals from Alan Browne and Troy Parrott in the first half handed Kenny’s side a commanding lead going into the break, and instead of a reaction coming from Steve Clarke’s side in the second half, Ireland put the hammer down and grabbed the third to secure the comprehensive victory.

In truth, there could have been more goals for the boys in green on that occasion as Scotland were uncharacteristically poor, most likely suffering from the hangover of missing out on World Cup qualification.

But Scotland looked a completely different unit on Wednesday night as they secured a 3-0 home victory of their own, beating Ukraine to move top of the League B Group 1 table, and as a result, they arrive into the re-match brimming with confidence.

Kenny, however, is not looking back at either fixture as to how he plans to approach the Hampden Park clash, starting from scratch in what he views as a completely new game.

"It’s a special game, both sets of players I’m sure are looking forward to it," said Kenny, speaking at the pre-match press conference.

"We treat every game in isolation. Scotland had a good win the other night, we respect that. They played well. We played well in our last few games.

"But every game is different, we are not dwelling on that [Scotland] game. We have to move on from that game. It’s a new challenge.

"Scotland were very good the other day, they played very well and to be honest with you, they’ve been very good since Steve Clarke took charge and qualified for the Euros. They’ve consistently been good so anything we get, we know we’ll definitely have to earn it."

A new Ireland was how Kenny described his side to the Scottish media, however, he said that the home performance against their team was not perfect, while there were still improvements to be made within the team in general.

"We feel we can improve for sure," said Kenny, when asked how far along was the evolution of this new-look Ireland side.

"We are constantly looking to improve, and we feel we can improve on aspects of our performance against Scotland. We’re not at our full potential, no, we’re not. We are continuing to improve."

Scotland manager Steve Clarke was praised for changing his formation for Wednesday’s victory over Ukraine, opting for a traditional back four, and while Kenny was not trying to anticipate what way the hosts will line out, he is confident that his players have the ability to adapt to whatever situation presents itself.

"I’ve really no idea," said Kenny, when asked what he expected to face on Saturday night.

"Scotland consistently played in a certain way, and they have the ability to change shape, but with good players you always have the opportunity to do that. It is immaterial for us. We have to focus on ourselves and make sure we’re right, that’s what we are firmly focused on.

"You have to adapt to your opponent, that’s the nature of football, it’s always been that way. We have the ability to adapt and that’s what we have to show."

Ireland have had a full week to plan for the Hampden clash and with no injuries in the camp, Kenny is adamant that whatever players line out – even if some are lacking club minutes – will be up for the physical challenge of the clash of the Celtic cousins.

"Injury wise, there’s no issues at all," said Kenny. "Everyone in the camp is fully fit, nobody is even doubtful, everyone is fit.

"It’s always a dilemma, it’s not an exact science," said Kenny, when asked about the match fitness of those who have been idle at club level.

"You want your players to play every week, there’s no substitute for that, for playing consistently. We don’t live in a perfect world and sometimes some of our players don’t get selected.

"More are playing regularly, [however] you can never be 100% certain. But I have no doubts, I’ve seen everyone train this week, we’ll be very strong going into tomorrow."

Stephen Kenny does not feel his Ireland team have reached their full potential yet as they face into tomorrow's #nationsleague clash with Scotland#rtesoccer
📱 Follow #SCOIRL on @rtesport website and @rtenews App
📺 Watch on @rte2 and @RTEplayer
📻 Listen on @RTERadio1 pic.twitter.com/ExhMA2vii3 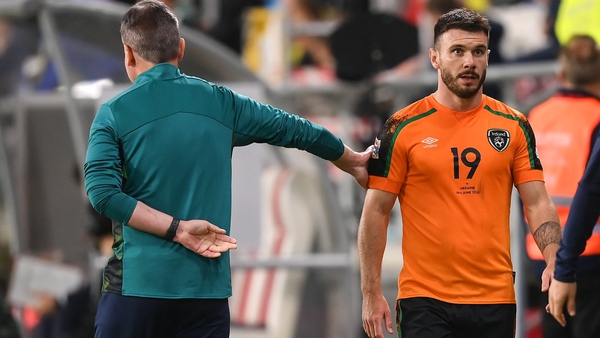