The Republic of Ireland secured their first ever Nations League victory, and they did it in style, beating Scotland 3-0 at the Aviva Stadium.

Stephen Kenny's side started on the front foot and were rewarded after 20 minutes as Alan Browne bundled the ball home from a corner, before Troy Parrott added a second eight minutes later, timing his run to perfection to help Michael Obafemi’s ball home.

And provider turned goalscorer six minutes into the second half as Obafemi grabbed the goal of the game with a wonderstrike from outside the box to wrap up the win.

Another bright start for Ireland with Knight again showing early, as Kennys's side looked to bring more energy to the side following two defeats, and it took less that four minutes to work their first attack on goal as Alan Browne's clipped the ball into box, with Parrott lurking, however, Craig Gordon did enough to clear the danger.

The Scots were slow to get going but looked very dangerous once up the field with Anthony Ralston outmuscling James McClean before playing a dangerous ball across the face. Andy Robertson arrived in from the left and let fly but Browne made a vital block.

Then in the 13th minute, two moments of madness in quick succession as Ireland looked to play out from the back, however, the Scotland attack were unable to capitalise

Six minutes later, Obafemi almost on end of a James McClean cross but for the slightest touch from Scott McKenna to take it out for a corner.

McClean proceeded to cross the width of the park to take the resulting set-piece, and it was worth every blade of grass covered as his back-post delivery was met by Shane Duffy to help it back across the goal as Browne arrived to bundle the ball home.

Scotland looked for a reaction but were almost handed a gift as Kelleher again opted to go short to Duffy. The press paid off and McGinn arrived unmarked with a clear look at goal from the edge of the box but smashed it wide.

And a minute later the net was bulging, but it was up the other end as Obafemi lifted a delightful ball over the top of the defence for the arriving Parrott, who cushioned the header past Gordon into the back of the net.

Scotland again worked hard to move the play up front but they had little creativity in the final third and it was the Irish who were back on the front foot in the 35th minute as Knight’s shot was deflected for a corner, before Duffy’s powerful header was well stopped by Gordon.

Scotland pushed for a goal before the break, aided at times from some sloppy Irish play in their own half, however, the two-goal lead maintained until half-time.

Scotland came out for the second half on the front foot, but five minutes in, Obafemi sent them right back to the drawing board as he bagged Ireland’s third goal.

Great battling in the midfield from Jayson Molumby to win a 50:50 allowing Parrott to slide the ball to the feet of the Swansea City man.

Without hesitation, Obafemi swivelled and smashed an incredible shot straight through the Scottish keeper from about 25 yards, the ball swerving dramatically before crashing into the back of the net.

It was his last action in the game as the striker appeared to damage an ankle in the process, with Scott Hogan coming on to replace the goalscorer.

And then Hogan almost added a fourth within five minutes of coming on as McClean lifted a great ball across the face and the striker’s header looked to be working its way back across the line but it was cleared off the line – VAR would look and confirm.

Scotland to their credit kept plugging away but they just could not work anything of note on goal, maintaining their aerial approach, easily dealt with by the Ireland defence.

Into the last ten minutes and Scotland gave up the ghost, with the hopes of a consolation even looking unlikely, and it allowed the Ireland manager to enjoy those final moments as he finally got to watch his side secure a Nations League victory ahead of Tuesday’s clash with Ukraine in Poland. 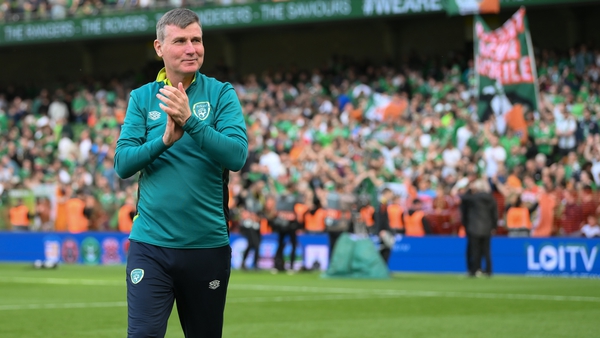