When the full-time whistle blew after Ireland's 3-0 win over Scotland in June, there was a sense that an exciting strike partnership was brewing between Troy Parrott and Michael Obafemi.

Both scored in that UEFA Nations League fixture but just as significantly was the way the two players dovetailed especially in the build-up to Parrott's headed goal in the game.

Unfortunately for Stephen Kenny, Obafemi was not available for the following game against Ukraine due to an injury picked up against the Scots.

And since the new Championship season began, neither player has got going on the goalscoring front with two goals between them in all competitions - Obafemi partially due to being left out of Swansea's squad in recent weeks until a cameo against Hull at the weekend and Parrott being part of a Preston team that have been struggling for goals.

Callum Robinson, the spark for Ireland last Autumn, is also in the squad, albeit without a club goal so far this season. Adam Idah, a player clearly valued by the Ireland manager, is absent through injury once again, Will Keane is not involved this time and Aaron Connolly is with the Under-21s.

However, other forwards in the squad for the upcoming fixtures against Scotland and Armenia are in good form.

Chiedozie Ogbene has been moved up front for Rotherham United and has responded with five goals in 11 matches, while Scott Hogan scored a hat-trick against West Brom last week to take his Championship tally to five.

But how will Kenny settle on a first-choice front two - or three in the event he reverts to a system not used since the defeat in Armenia - for the upcoming games? His former Dundalk goalkeeper Gary Rogers had his say on the RTÉ Soccer Podcast.

"I think Ogbene has to be in the mix given the form he's in at Rotherham," he said.

"He's been playing up top and he has four goals in nine (Championship) games. I would have liked to see Georgie Kelly play a little bit with him in his club form just because the two Irish boys together, they haven't been a partnership as yet and Georgie scored last week. But I think Ogbene comes into the picture.

"Parrott has been unfortunate because he's been playing really well. In the game I saw him against Rotherham, he played really well that game with a really massive threat but just didn't score.

"I think once he clicks into gear and gets a couple of goals under his belt, he could have a really good season for Preston.

"It's one that Stephen has to be careful with because you're looking at players who are scoring goals and are in form.

"Is Hogan and Ogbene a partnership if you went with them? I don't think so but I don't think he will go far away from what worked against Scotland would be my gut (instinct) on it and I think the fact that Obafemi has played and got a little bit of game time, Stephen will be happy with that and (it will) probably motivate (Obafemi) in terms of the bit of disappointment in the move (to Burnley) not going through.

"He'll be able to tap into that emotion to try and get the best out of him possibly for Scotland, so it's one of those, it's in the balance and it's what way Stephen feels is best to go with. But I would imagine he won't veer too much from what he went with against Scotland."

Follow the Republic of Ireland v Scotland this Saturday (kick-off 7.45pm) via our live blog on RTÉ.ie/sport and the RTÉ News app, watch live on RTÉ 2 and the RTÉ Player, or listen to national radio commentary on RTÉ Radio 1.

You can also follow the Republic of Ireland v Israel in their UEFA Under-21 European Championship play-off this Friday (KO 7pm) via our liveblog on RTÉ.ie/sport and the RTÉ News app, or watch live on RTÉ2 and RTÉ Player. 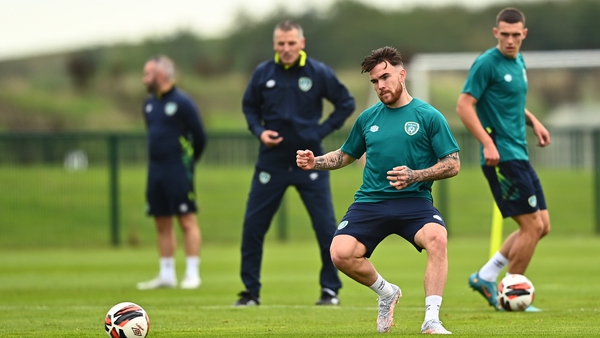