Live tracker on RTÉ.ie and the News Now app from 5.30pm

After the history making of last week, and a first point in European group stage competition, Shamrock Rovers are set to face arguably their toughest test later this evening.

While there might have been a sense of a missed opportunity against bottom seeds Djurgardens last week at Tallaght, getting anything from this trip to Belgium to take on the group favourites would be a bonus for Stephen Bradley's side.

Like Rovers, Gent had a chance to qualify for the Europa League through the play-off round, but they were well beaten. For them it was a Omonia Nicosia of Cyprus who ended their interest in the middle competition of Europe's three, winning 4-0 on aggregate.

This evening's hosts were fifth in the Belgian Pro League last season, and that's precisely where they find themselves now.

After starting their league campaign with eight points from their first four games, they've lost two of their last four matches; although one of those was against early pace-setters Antwerp.

They come into tonight's meeting with the Irish champions off an expected 2-0 victory over Waregem on Sunday, where Hugo Cuypers scored his fifth goal in 12 games since moving from fellow Pro League outfit KV Mechelen, with a bullet header. He's the 'go to' striker, and last season's top scorer, Morocco international Tarik Tissoudali out injured.

Hyun-Seok Hong and the experienced Sven Kums pull the strings for them in midfield, with both scoring goals in recent games. Defensively, Jordan Torunarigha has been signed on loan from Hertha Berlin and has fit nicely into the side.

Davy Roef is the regular goalkeeper, having kept two clean sheets this season, although another loanee - Paul Nardi from Ligue 1 side Lorient - played for Hein Vanhaezebrouck's side in last week's scoreless draw with Molde.

A rare occasion for Gent

It's been over 17 years since Gent last faced League of Ireland opposition in Europe. That was against Bohemians in the old Intertoto Cup, when a Tony Grant header sent Bohs to Belgium on the front foot.

But it wasn't to be, as Gent won 3-1 over there to knock the Dalymount Park side out of the competition.

Three years previously St Patrick's Athletic had only gone out on the away goal rule as they attempted to turn around a two-goal deficit at Richmond Park.

Efforts from Ger McCarthy, Mbabazi Livingstone and Paul Osam looked like they would be enough for Pat's, before Ibrahim Faye broke their hearts with a late, away goal for Gent.

Since then they were comfortable 6-0 aggregate winners over Cliftonville in the 2007 Intertoto Cup.

Hoops looking to improve away record

Back to the present, and Shamrock Rovers can travel with some confidence that they can pick up a first away point in European competition. But Bradley will know that some of their performances away from Tallaght in Europe this season have left a lot to be desired.

A 3-0 away defeat to Ludogorets in the Champions League second-round qualifier was particularly frustrating for Rovers, as they showed they could live with the Bulgarians in west Dublin when they took a two-goal home lead, even if only briefly.

The lessons hadn't stuck as they lost 4-0 to Ferencvaros in Hungary just under a month later, before once again winning the home leg having left themselves too much to do.

Bradley though, has a plan to shore up the middle third, according to former Hoop Ollie Cahill.

"It's the distances," he told this week's RTÉ Soccer Podcast.

"The Ferencvaros game when they were away from home, the distance between the striker and the back-line was just too big and it meant that the midfield never got in touch with their back-line.

"The gaps were just too big and I was speaking to Stephen (Bradley) and it was something that they fixed for the home leg where Gary O'Neill ended up being a little bit tighter to his back-three but the back-three also squeezed up an extra five to ten yards as well which stops that gap that allows the 10s or the strikers to drop in and play."

Their domestic form is solid. They've an Extra.ie FAI Cup quarter-final to look forward to on Sunday against Derry City, coincidentally the side closest to them in the SSE Airtricity League.

Because of both their Cup and European run, Rovers have only played five league games since they were held by Drogheda United in July.

Sunday's comfortable victory against bottom side Finn Harps was just their second in the last five in the Premier Division, and that was coupled with a derby defeat to Bohemians at the start of the month.

All that said, they're still top of the pile with a couple of games less played than Derry and Dundalk, the next two teams in the table.

Added to that, arguably their most creative player, Irish international Jack Byrne, played his first full 90 minutes at the weekend since May as he scored one, after setting up another for Neil Farrugia. The Dubliner's distribution is excellent, and he could be the key to unlocking the home defence later, even if he doesn't play the full game.

On Byrne's performance against Harps, the manager said: "It was great to get Jack 90 minutes on the pitch. We've seen glimpses that he’s getting back to himself, we’ve been building to getting him 90 minutes, so getting a full game on Sunday was great. The goal capped off a good performance from him."

Rory Gaffney has been in fine form of late, scoring his eighth goal of the season against Harps on Sunday. He's also found the back of the net twice in Europe this season, against Shkupi and Hibernians.

Andy Lyons is heading to Blackpool in January, but until then he'll be a dangerous asset for Bradley. He's also on the goal trail, having found the back of the net of late against Harps, Drogheda (in the cup) and Ferencvaros at Tallaght.

With all four sides on a point each heading into today's fixtures, it will be interesting to see the approach Bradley takes. A point would be fantastic ahead of the back-to-back meetings with Molde, seen before the start of the group stages as the battle for second place.

If Rovers could deliver a really big away performance, driven on by the expected 1,000 supporters travelling over for the game, then their ambitions can go even higher in what is one of the more open groups in this season's Conference League. 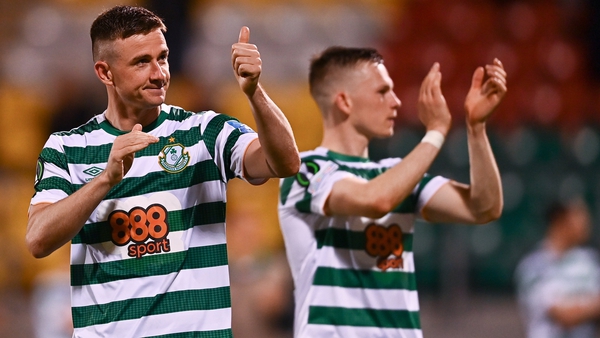