It was déja vu all over again for Shamrock Rovers as a 4-0 defeat to Hungarian champions Ferencvaros all but ended their Europa League group stage hopes.

An brace from Malian international Adam Traoré and one apiece for Carlos Auzqui and Eidar Civic saw the hosts to a simple victory over an injury-hit Hoops squad.

Rovers went into the game without captain Ronan Finn and top European goalscorer Graham Burke and, in 36-degree heat, they saw their challenge wilt away.

The Hoops began the game brightly but were always liable to the slickness and pace of the Ferencvaros front three.

There were just eight minutes gone when Moroccan striker Ryan Mmaee, a target for Celtic, cut in on his right foot and bent a shot onto the post.

And the hosts hit the front shortly after as Mats Knoester beat Dan Cleary and Lee Grace to a low cross and it was smashed home from close range by Auzqui.

The Hoops continued to pose a threat on their rare forays forward but Andy Lyons’ cross was a touch too high for Greene.

Mmaee hit the post once more 11 minutes before the break as Watts was caught in possession by Auzqui, Mmaee hitting the opposite post after shifting past two challenges.

The wideman’s luck had diverted him in front of goal but Mmaee managed to lay on the second for Traoré moments later as he teed up the striker to smash home from five yards.

34 mins: Ferencvaros 2-0 Shamrock Rovers - A minute after hitting the post for a second time, the livewire Ryan Mmaee lays it on a plate for Adama Traoré to double the hosts' lead#rtesoccer
💻https://t.co/DB1uZo5zpN
📺 https://t.co/JYf06csaIG pic.twitter.com/ucukh3Zf2h

Rovers were up against it but they almost produce something on half time as Greene rolled Lorans Paszka, but the defender recovered well to block his shot.

The visitors came out with intent in the second half but disaster struck within three minutes as the home side went three up.

Mannus did well to save from Mmaee but a panicked Seán Gannon stabbed the ball into the path of Traoré to notch an easy double.

The keeper would have a busy second half as he saved again from Mmaee and then sub Marquinhos.

The Hoops benefitted from the arrival of Jack Byrne in the second half and he set up a fellow sub in Neil Farrugia, but he blasted over when debutant Gideon Tetteh was better placed.

And the injury-time curse struck once more as a floated corner found sub Ediar Civic, and he volleyed into the ground to send the ball bouncing past Mannus into the bottom corner. 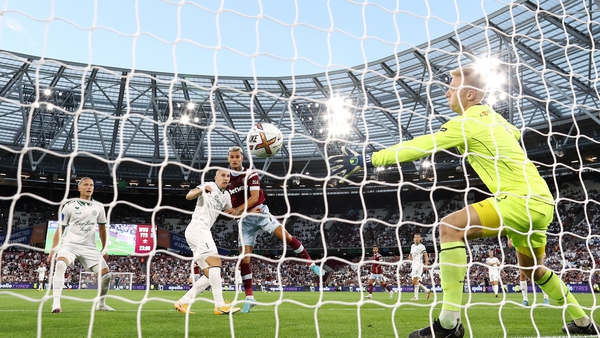