Shamrock Rovers have it all to do in Tallaght next week after a superb first half showing from Ludogorets put the Bulgarian side in the driving seat in their Champions League second round first leg tie in Razgrad.

A Pieros Sotiriou brace before the break had the Europa League group stage regulars in charge at the Huvepharma Arena.

Rovers were much more involved in the second half, but Igor Thiago's goal in injury time at the end of the game may have killed off any hope of a Hoops comeback in next Tuesday’s second leg.

Hoops coach Stephen Bradley made one switch from the starting eleven that played out a professional scoreless draw with Hibernians in their opening round, second leg tie in Malta last week, with Richie Towell replacing Aaron Greene.

From the first whistle, it was clear the Hoops were up against a much stronger outfit than anything they would regularly face at home.

Ludogorets 1-0 Shamrock Rovers - Pieros Sotiriou gets ahead of Sean Hoare to head the lead goal past a stranded Alan Mannus after 25 minutes
💻 https://t.co/zjbfbjUDzQ
📺 https://t.co/JYf06csaIG pic.twitter.com/vc1uL3aHzp

Rovers spent the majority of the opening half facing the Ludogorets attack in the searing heat, with goalkeeper Alan Mannus much more involved than he was in Malta.

The former Linfield man dealt with Cauly Souza’s tame effort 11 minutes in, but Mannus was to be beaten for the first time 14 minutes later.

The Eagles switched play from left to right before Sotiriou beat Sean Hoare to the ball to nod home the opener.

The hosts, currently chasing their 11th consecutive league title on the domestic front, continued to show their class as Rovers struggled to deal with their speed and power.

Inevitably, their second arrived in the 34th minute.

Lee Grace did enough to scramble Brazilian Rick’s shot off his own line, but the Rovers defence were powerless as Sotiriou followed up to smack home his second goal in less than ten minutes.

Ludogorets 2-0 Shamrock Rovers - Sotiriou drills home a second after brilliant work from Cauly down the right flank and Lee Grace blocked an initial shot on the line - #LOI champions up against it in Bulgaria
💻 https://t.co/zjbfbjUDzQ
📺 https://t.co/JYf06csaIG pic.twitter.com/JjuJL2kCiG

Rick wasn’t too far off a goal of his own six minutes from the break. Souza’s cross just too high for the 22-year-old who saw his header sail over the Rovers crossbar.

Behind by two at the interval, it could have been a lot worse for the Irish side at half-time.

Sotiriou almost had his hat-trick only to head the ball back off Mannus’ back post from a whipped Cicinho cross on 41 minutes. Suggestions that the ball may have come off Sean Hoare’s arm on its way to goal waved away by the Portuguese official.

While Mannus pulled off a wonderful save when he reached, met and pushed away Souza’s placed effort aimed towards the top corner.

The Dubliners did enjoy a much brighter second half as they played on the front foot.

Hoare had a half chance in the 68th minute but couldn’t react in time when substitute Graham Burke’s corner landed at the feet of the centre half at the edge of the six-yard box, after Andy Lyons had challenged for a header.

While Grace volleyed well over on 73 after Burke’s next corner was cleared as far as the Tipperary native 20 yards from goal.

Burke himself almost caught Padt out eight minutes from time when the Dutch goalkeeper had to rush to bat away the former Preston player’s cheeky strike from out wide.

Ludogorets make it 3-0 with practically the final kick of the match. That could be Game Over, says Alan Cawley. Heartbreak for the Hoops.#RTEsoccer
💻 https://t.co/zjbfbjUDzQ
📺 https://t.co/JYf06csaIG pic.twitter.com/tdYHjCFoWJ

A Rovers consolation to bring into the second leg certainly would not have been undeserved going on their second half recovery and Burke wasn’t too far away on 88 minutes when his set-piece sneaked around Padt’s post.

Mannus pulled off two impressive stops in injury time but was helpless in the 94th minute when Thiago’s shot took a huge deflection off Hoare on its way to goal. 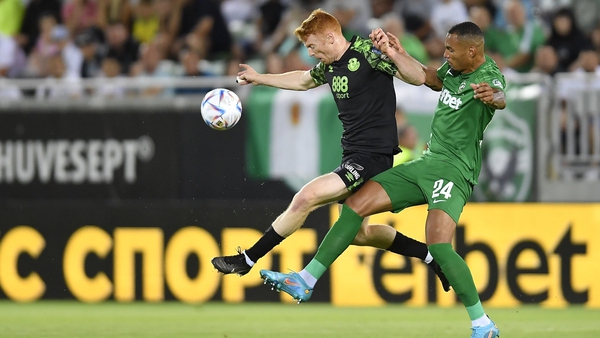