Shamrock Rovers manager Stephen Bradley felt a point at Derry City on Friday was a satisfactory result in the midst of a hectic week for his side but felt the SSE Airtricity League authorities showed "zero leadership" in not pushing the game back by 24 hours.

The SSE Airtricity League leaders were in North Macedonia on Tuesday where a second-leg win over KF Shkupi saw them qualify for the Europa League play-off round and simultaneously guarantee themselves a passage to the Europa Conference League group stages.

Bradley's team will take on Hungary's Ferencvaros in Budapest on Thursday in the first leg of their Europa League play-off round tie (live on RTÉ2 and RTÉ Player).

Amid a packed schedule, the Rovers manager had confirmed midweek that the club had sought to push the Derry game back by a day or two, only to have that request turned down by the league - a decision he described as "poor from the league" and "not good enough" after watching his side draw 0-0 with the Candystripes on Friday night.

"We're talking about promoting Irish football and wanting our teams to do well and we have to understand it benefits everyone in the long run," said Bradley.

"We didn't want [the game] off. We just wanted it moved 24 hours like is normal in every country in the world when you have two away European games.

"For some reason the league saw fit not to help us and I think that's really, really poor from the league and the people making the decisions and it needs to be looked at."

Bradley added that "the league need to step in make a call there and they've shown zero leadership there in my opinion".

The goalless draw at the Ryan McBride Brandywell Stadium means Shamrock Rovers remain four points plus a game in hand clear of Dundalk at the top of the division.

"Considering the big game we had on Tuesday night, the mental and emotional energy that takes out of you [and] obviously the travel, we'll take a point," Bradley said, adding that he was impressed by his side's first-half performance.

"But what we did was we showed the character of champions and we stayed in there and saw it out."

Bradley also praised his goalkeeper Alan Mannus for keeping his side in the game, including a first-half penalty save to deny Will Patching.

"The penalty save was a great save. I keep saying Alan's the best in the country and he proves that time and time again," he said.

"He had to make the penalty save but also one or two other saves to make sure we got the point and that's why he's the best in the country."

Derry City manager Ruaidhri Higgins rued that failure to capitalise from that "big moment in the game" from 12 yards and said Rovers would be the happier of the two teams at full-time.

"It should have been all three [points]. I think first half was 50-50. Obviously we've missed the penalty and maybe slightly shaded it first half but second half was one-way traffic," he said.

"I thought we were excellent second half and pinned them in and they couldn't get out and without doubt we deserved to win the game. But I've said this a few times this season that football is about putting the ball in the back of the net.

"You can be great, you can be eye-catching but unless you put the ball in the back of the net, you don't get what you deserve." 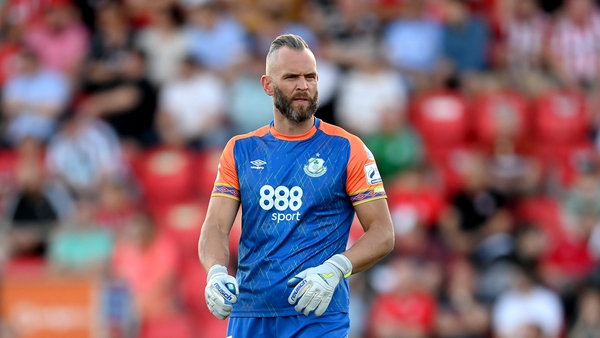