Shamrock Rovers marched into the Europa League play-off round, and guaranteed themselves a place in the Europa Conference League group stage at the very least, after they beat Shkupi to wrap up a 5-2 aggregate victory on Tuesday night.

Shkupi had been firing themselves up all week over the perceived injustice of Dublin Airport failing to accommodate their charter flight for last week's first leg in Tallaght. Instead they were diverted to Shannon Airport.

Prior to that first leg the club issued a statement promising to respond "like lions on the field". Ultimately, they were contained and tamed by Stephen Bradley's impressive side.

The Hoops took a 3-1 first leg lead to the Todor Proeski Arena in Skopje, North Macedonia tonight – a lead they diligently protected before Rory Gaffney's deflected effort on 65 minutes killed off the tie.

With five minutes to go, Aidomo Emhaku put the cherry on top when he beat keeper Kristijan Naumovski to a punt forward and knocked the ball into the empty net.

Sunday Adetunji did drill home a consolation at the death but it was it was too little, too late.

The Airtricity League Premier Division leaders will now face Ferencvaros in the Europa League play-off after the Hungarians were beaten 4-2 on aggregate by Qarabag in their Champions League third round qualifier.

Even if they lose that tie, Rovers will drop into the group stages of the third tier Europa Conference League – their graft and quality rewarded by a lucrative European safety net.

Aaron Green started for the visitors, with Gaffney leading the line and Jack Byrne joining Burke on the bench. But Chris McCann, who was terrific in the first leg, missed out due to a calf injury.

Shukpi steamed into their opponents from the off as they looked catch Shamrock Rovers cold.

Inside the first minute, Adetunji surged down the left and steered in a low cross the dropped to Ali Adem, who fired wide.

Sixty seconds later, the Hoops showed what they were capable of when Gaffney had an effort turned on to the post by Naumovski. 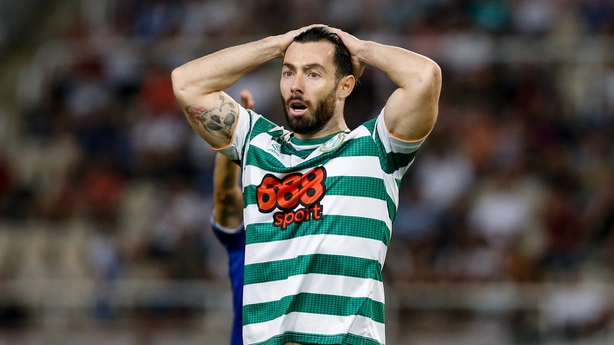 Then Richie Towell was presented with a glorious chance after Ronan Finn teed him up inside the area following lovely build-up play. Towell's shot looped over the bar via a defender's shin.

It was a frantic start, punctuated by the loud bangs of fireworks that were intermittently let off around the ground. Shkupi were desperate to force the issue, but they were confronted by a Shamrock Rovers team with the energy to snuff them out and the composure to ask questions themselves.

Blerton Sheji was booked in the 21st minute when he took Dylan Watts out in the middle of the park to halt a counter, and that frustration would only grow.

The tireless trio of Towell, Greene and Gaffney pulled Shkupi into areas of the pitch they didn't want to roam.

Greene bent an ambitious effort a couple of yards over the bar from 30 yards out just before the half-hour mark, but two minutes later Shkupi almost got the lifeline they craved when Faustin Senghor prodded over from close range after a free-kick had been glanced towards the six-yard box. Then Queven tested Alan Mannus with a bouncing effort from range that the stopper gathered cleanly.

Rovers should have taken the lead nine minutes before half-time when a sloppy pass from keeper Naumovski was intercepted by Finn. He found Towell in the box but his shot was blocked on the line by Senghor before Naumovski scrambled back to save Gaffney's follow-up.

Shkupi made a triple substitution at the break and started the second half with real purpose, Senghor lashing in a vicious strike that dipped just over the bar and Pepi Gjorgiev shinning an attempt straight at Mannus having brilliantly controlled a long ball.

Approaching the hour, Kristijan Trapanovski blazed over from just inside the box and at that point the Hoops were starting to drop a little deeper. But on 65 minutes, they killed off the tie.

Burke – who'd only just come on for Towell – fizzed a pass into Gaffney. He turned and let fly from the edge of the box, his attempt looping up off the boot of Xhelil Abdulla and sailing over Naumovski's head.

Shkupi kept pushing. Mannus made a smart save from Georgiev's header, and Queven flashed a decent hit wide. But belief drained from the hosts. 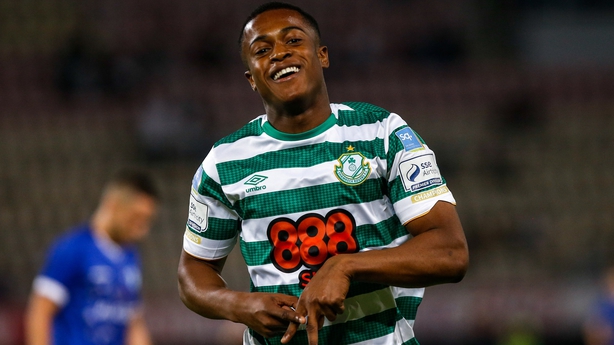 Bradley brought fresh legs off the bench and another one of his subs made an impact as Aidomo Emhaku (above) galloped onto Burke's ball over the top, beat Naumovski to it and then knocked it into the empty net.

Adetunji did get one back for Shukpi with a clinical strike in stoppage time but it was a goal he barely celebrated.

Game over; tie over; Rovers' European odyssey only just beginning. 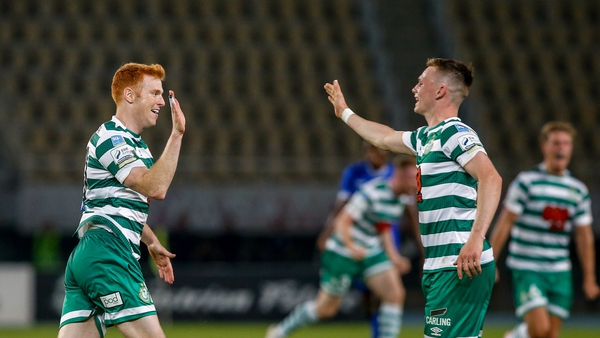