Not that it should be but if representation in the Premier League is a status symbol of sorts, last season was one to forget for the dwindling Irish contingent in that rarified air.

Among a set of 14 players to ply their trade in the English top flight in 2021-22, just under 10,000 minutes were amassed between them - a record low for Irish players in an EPL era when representation had been trending downwards for some time - with Ireland captain Seamus Coleman clocking up the biggest number.

The Everton full-back was 81st on the overall list for minutes played last season with Nathan Collins next best, ranked 213th.

While Collins returns to the top division with Wolves after transferring from relegated Burnley, he and Southampton arrival Gavin Bazunu are outliers when it comes to younger Irish talents cementing their place towards the top of the English pyramid. Bournemouth's newly-promoted Mark Travers and Liverpool number two Caoimhin Kelleher also fall under that category, albeit the latter is unlikely to see much game-time once again at Anfield.

As The Independent's chief football writer Miguel Delaney told the RTÉ Soccer Podcast recently, the hegemonic global footprint of the Premier League's catchment area means the entry way for Irish players to England is usually lower down the tiers now and at later ages.

And along with the restrictive impact of Brexit rules for under-18s, clubs at the higher end are increasingly looking less keenly towards Ireland for players in their mid-teens as had been the well-worn developmental path for aeons.

"I was told recently that because of the Brexit ruling a lot of Premier League clubs have taken their main scout out of Ireland, so they do everything through intermediaries or people they don't actually employ," Delaney said in May, citing Manchester City, who brought Bazunu to England in 2019, as one of the very few leading clubs that have retained a full-time scouting presence here.

So it's the Championship, League One and Scottish Premiership, which all kick off this weekend, where the eyes should be trained more intently across next season - as well as Italy in the long-term as a clutch of young Irish players try to establish themselves in Serie A and B.

While the Championship will provide a home for Irish players who were either (A) already in that second tier, (B) loaned/sold/newly contracted to its clubs (e.g. Jeff Hendrick, Troy Parrott, Shane Long and Ciaran Clark etc), (C) relegated to it or (D) promoted as part of Wigan and Rotherham United's well-stocked contingents for example (Chiedozie Ogbene, Will Keane and James McClean etc), it's especially the tier directly below which will see the most newcomers moving directly from this island.

Georgie Kelly, who has been promoted to the Championship with Rotherham, also made the same transition in the previous transfer window, and Andy Lyons has also been linked with a switch to Blackpool in that second tier.

For ex-UCD and Shamrock Rovers midfielder Paul Corry, who experienced life in the English second, third and fourth tiers during his career, League One is currently the most accessible starting point for players moving across the Irish Sea, especially at the more progressive clubs like MK Dons and Oxford.

"I think your first move over is very important and I think Darragh Burns and Danny Mandroiu have got what I call 'good landing grounds' where you can get in and afford to make a couple of mistakes but still actually be in contention of playing within a first team, whereas you might not get that sort of an allowance in a Championship team," he told the RTÉ Soccer Podcast earlier this month.

Burns has already served notice of his talent during MK Dons' pre-season with a brace against Norwich's U23s the week before last, while Devoy followed suit with a goal against Barnet on Saturday. Both have earned ample minutes in the lead-up to the weekend's big kick-off.

As Corry and former Drogheda United, Longford Town and Shamrock Rovers defender Graham Gartland outlined on this week's episode, the fact that those players are moving across when they're in their late teens to early 20s gives them a better shot at establishing themselves successfully.

Indeed, Aberdeen's Irish manager Jim Goodwin cited the LOI as somewhere he kept a close eye on for recruitment rather than perusing the English U23 scene due to the superior levels of maturity and first-team experience.

"I firmly believe that you're better off taking a player from Ireland who's got 50-100 appearances in the League of Ireland as opposed to someone who has been at a Premier League club in England for 3-4 years and all he's done is play U21s or U23s development leagues," the Wateford native told RTÉ Sport last October during his previous spell at Scottish Premiership St Mirren, where he had the likes of Jamie McGrath and Conor McCarthy on the books.

McCarthy is an example of a player who's taken a roundabout route to League One, having started his career at Cork City and then signed for Barnsley via two years in Scotland.

He is one of around 40 Ireland eligible players in the English third tier ahead of the new season - a number subject to change given the likelihood of moves up the ladder for the likes of current senior international Jason Knight at relegated Derby. They form the largest foreign contingent in the division, making up approximately 20% of the non-English players.

Irish-eligible players also top the foreign list in the Championship but the proportion drops to closer to one in six.

But when it comes to the Premier League, the number of Irish players is barely scratching the double figure mark when you factor in the likelihood that Conor Coventry (West Ham), Harry Arter (Nottingham Forest) and Connor Ronan (Wolves) are likely to go out on loan again with Goodwin keen to be reunited with the latter.

Not to mention Darren Randolph is way down the pecking order at the Hammers. All of which means the proportion of Irish players among the foreign contingent is going to end up being relatively minute.

Hence why keeping an eye on League One will continue to be a vital part of Stephen Kenny, Jim Crawford and their respective staffs' plans when selecting senior and Under-21 squads. 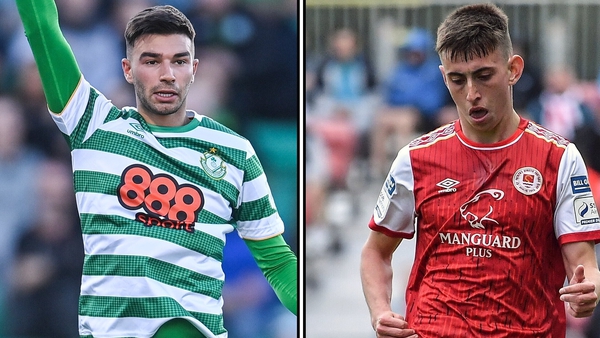 Paul Corry: Danny Mandroiu and Darragh Burns poised to thrive in League One