Live coverage on RTÉ2 and the RTÉ Player from 6.30pm.

Live commentary on an extended RTÉ 2fm Game On.

Live blog on RTÉ.ie and the RTÉ News Now app from 6.30pm.

It will be a record attendance for a Republic of Ireland women's home game. On Wednesday, the FAI confirmed over 5,500 tickets had been sold for this clash, which betters the current record of 5,238 that showed up for the Ukraine game back in October 2019.

It will be dry and bright for most of the day, with some isolated showers a possibility. Things will turn a little cloudier as kick-off approaches, with temperatures dipping to around 6 or 7 degrees.

Back to Tallaght with a chance to build momentum 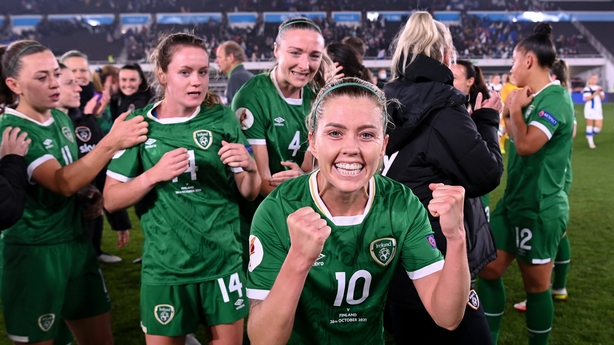 It's one defeat and one victory from two games played in 2023 World Cup qualification so far, but Vera Pauw knows that the next week represents an opportunity Ireland dare not squander.

They began their Group A campaign with a highly creditable performance against world No 2-ranked Sweden, who squeaked a 1-0 win in Dublin thanks to Louise Quinn's unfortunate own goal. Four days later Ireland went to Finland - the group's second seeds - and came away with a very impressive 2-1 success.

That result was a real statement of intent from a side that have spent much of the last year playing high-calibre opposition to best prepare themselves for this qualification campaign.

Standards are high; and so are expectations.

Pauw is desperate to get Ireland to a major tournament for the first time and has been open about the need to learn the lessons from their painful near miss in Euros qualification last year. Ireland slipped up to Greece and Montenegro when a play-off place was within their grasp. This time, they simply cannot afford to make the same mistakes.

Sweden are hot favourites to top the group but second - which would guarantee at least a play-off berth - is very much up for grabs now that the Finns have been beaten on their own turf.

Having faced the two strongest teams in the group Ireland now face off against the two weakest - on paper at least.

Georgia come to town on Tuesday but first up is a showdown with Slovakia, who were only beaten 1-0 by the Swedes and edged out 2-1 by Finland. They will be no pushovers.

The Slovakians have a win under their belt too having overcome Georgia 2-0 in October, but anything less than an Irish victory tomorrow night will be a serious blow to their hopes. They must pick up three points.

What to expect from the Slovakians

Slovakia will be pretty familiar to some of the older members of the Irish squad. They were in Ireland's 2019 World Cup qualifying group, with the Girls in Green prevailing 2-0 and 2-1 in their two meetings.

A lot of water has passed under the bridge since then however.

Certainly Ireland have progressed, with more players now featuring in England, Germany and the USA. Pauw has enhanced the squad depth too, but she's wary of the challenge the visitors will pose on Thursday night.

Having ceded a lot of possession to Sweden, and hit the Finns on the counter in Helsinki, Ireland will now be tasked with trying to break down a stubborn, deep and organised defensive unit.

Don't expect the Slovakians to come to Tallaght and play expansive football.

Ranked 45th in the world, they're relatively limited but certainly have enough about them to make this awkward.

AC Milan goalkeeper Maria Korenciova was voted Slovakian Woman's Footballer of The Year last April and you suspect she'll have a busy evening. Ahead of her is a team of well-drilled, hard workers.

An early goal would do wonders for Ireland but then again, Fridolina Rolfo put the Swedes ahead against Slovakia after ten minutes and they failed to add to their tally.

Slovakia didn't change the gameplan at all - they were physical, cynical and incredibly dogged. More of the same is likely to be on the menu in Dublin.

Shelbourne defender Jessie Stapleton [on the losing side in the cup final], Celtic utility player Isibeal Atkinson and Birmingham City's Emily Whelan [both formerly of Shels] have been drafted in.

Stapleton, 16, is included for the first time following a really impressive debut campaign for Shels in the Airtricity Women's National League. Her clubmate Jess Ziu has also been added to the panel, while former England Under-17, Under-19 and Under-23 goalkeeper Megan Walsh received international clearance from FIFA in time to come into the fold.

The Brighton & Hove Albion stopper qualifies for Ireland through her Wexford-born grandfather and will provide more competition for Courtney Brosnan and Grace Moloney.

The other change of note is in the dugout: ex-Wexford Youths boss Tom Elmes has replaced Eileen Gleeson as Pauw's No 2. Gleeson has taken over as manager of Glasgow City.

The view from the managers

Vera Pauw: "We need to play with the same intensity and level of approach as we did against Finland and Sweden. If we cannot do that then we will not win.

"We need to have more calmness on the ball. Our possession play can be very good and that's what we will stress, that we don't give the ball away in our build-up. From there we need to find the gaps in the defence of Slovakia.

"They are a good team and we are in a very tough group. The second, third and fourth seeds are very close and their ranking doesn’t reflect their level of play. They’re very structured with a few players that can really make a difference so we have to be at the top of our level."

Peter Kopun (Slovakia): "We can get points off Ireland," the Irish Examiner reported Kopun declaring on Tuesday. "I don't want to come across as having a big mouth but the strength of this team, how the players are set up, entitles me to such optimism. I know Tallaght Stadium well, but quite seriously I can say that this third trip will bring a different result."

Follow Republic of Ireland v Slovakia tomorrow evening via our liveblog on RTÉ.ie/sport and the RTÉ News app, watch live on RTÉ 2 and the RTÉ Player or listen to live commentary on RTÉ 2fm's Game One (6.30pm) 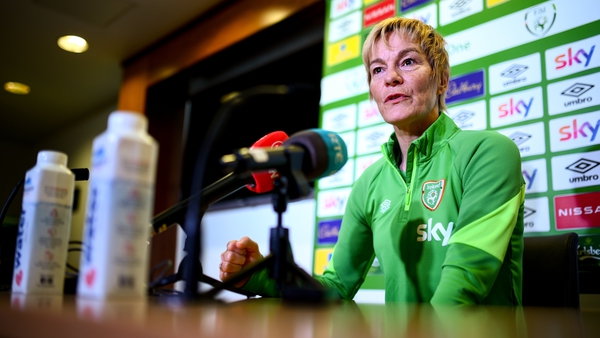