The Republic of Ireland produced a superb defensive performance to plunder a crucial 2-1 win over Finland in Helsinki and give their World Cup qualification hopes a huge boost on Tuesday evening.

Ireland lost their opening game in Group A to top seeds Sweden last Thursday night in Tallaght, making this clash a "must not lose" encounter, according to boss Vera Pauw.

A brilliant tenth-minute free-kick from Megan Connolly was just reward for a lightning start from the Girls in Green, and though the hosts fought back to equalise seven minutes into the second half through Adelina Engman, Denise O'Sullivan nodded her country back in front just four minutes later.

An incredibly gutsy rearguard action followed as Pauw's team saw out a massive win against their main rivals for a place in the play-offs.

The Finnish FA moved this clash to the Olympic Stadium as part of celebrations marking 50 years of women's football in the country.

It meant a crowd of around 6,000 supporters were inside the impressive ground to create a boisterous, partisan atmosphere.

Pauw started with the same 11 that went down 1-0 to Sweden, with O'Sullivan in the middle of the park after recovering from an arm injury she sustained towards the end of that game.

The Finns - ranked 25th in the world, eight paces above Ireland - had two qualifier wins out of two coming into this having beaten Slovakia and Georgia, but it was the visitors who settled better.

Positive play down the left from Katie McCabe six minutes in led to a scramble in the home box, with O'Sullivan's eventual effort being deflected over the bar for a corner. McCabe's wicked in-swinger subsequently caused panic, forcing the well-placed Anna Westerlund to nudge the ball off the line with her midriff.

Ireland kept up the pressure. In the tenth minute they won a free-kick when Heather Payne's effort was blocked by Ria Oling's arm just outside the box. Up stepped Connolly to bend one over the wall and into the net despite goalkeeper Tinja-Riikka Kopela getting a decent hand on it.

The Finns were caught cold by Ireland's high-pressing, aggressive early approach as they routinely lost possession, but after a rocky first 15 minutes, they started to find their rhythm.

Adelina Engman screwed a strike from distance wide as Finland pushed up in search of a response and though McCabe surged into the box before being crowded out following a fluid 19th-minute counter, Ireland began to get pinned back.

They were almost punished for their failure to deal with a corner as Natalia Kuikka lashed a decent chance over from inside the box on 22 minutes; then Eveliina Summanen nodded a difficult header past the post.

The dangerous Summanen steered another header wide after McCarthy coughed up a free-kick on the right wing before Kuikka went close again as she lofted one over the bar from close range.

Brosnan had a rush of blood to the head just before the break; she was left stranded after darting from her goal to clear a ball she got nowhere near. Linda Sallstrom eventually drove an effort into the stands as Ireland got into half-time in the ascendancy.

Their cause wasn't helped by an injury to McCabe five minutes after the turnaround. The Arsenal star was caught late by Engman on the left touchline.

It left the visitors down the 10 as McCabe received treatment - and Finland emphatically made the most of that advantage when Emmi Alanen exploited the vacant space on Ireland's left side to steam down the flank and pull back a cross that Engman converted.

Finland 1-2 Republic of Ireland - Denise O'Sullivan has Ireland back in front, getting her head on the end of a Heather Payne cross

It was a desperate blow - but Ireland responded superbly.

In the 56th minute Jamie Finn slipped Payne down the right, she stood up a cross that Kopela failed to hold and O'Sullivan bravely nodded home the loose ball.

Again the Finns went on a frantic offensive charge. Louise Quinn and McCabe slid into produce a brilliant double block after a low cross almost broke Finland's way; Kaivisto went close with a 25-yard chipped; and the pressure kept mounting as the home crowd were whipped into a frenzy.

In the 63rd minute the tireless McCabe relieved the pressure with a driving run that ended with the Dubliner stinging Kopela's palms with a low shot. She threatened again five minutes later after pouncing on a loose ball and steaming forward before unleashing a powerful effort that flashed wide.

The Finns huffed and huffed but they kept running into a green wall that was brilliantly marshalled by Savannah McCarthy and Louise Quinn, with Brosnan rock solid behind them.

Four minutes from time, on a rare occasion where Brosnan failed to deal with a cross into the area, Niamh Fahey had to be razor sharp to block a point-blank effort.

Finland threw everything at their opponents but they couldn't breach them, with the final whistle being greeted by passionate Irish celebrations.

There's a long way to go in this group, but this was a result of some significance.

Ireland are up and running. 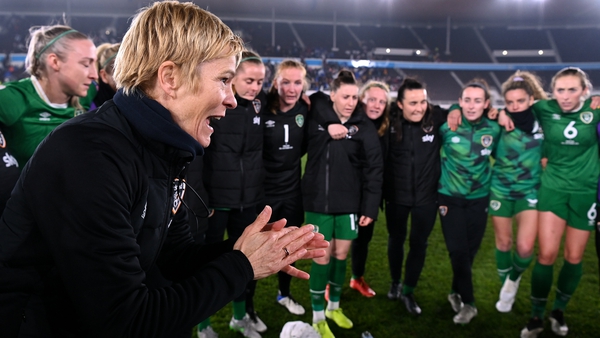 Lessons from defeats made the difference, says Pauw