Taoiseach Micheál Martin has hit out at UEFA for moving Euro 2020 games out of Dublin and believes they are trying to "force spectators in prematurely".

Dublin's Euro 2020 games have been moved to Russia and London as the FAI and the government were unable to guarantee spectator attendance, a condition set by UEFA to keep games in the original cities.

A minimum of 11,000 will attend the matches, with Minister of State for Sport Jack Chambers saying it would be an "extraordinary step up" for Ireland to have that in June.

The three Group E matches featuring Slovakia, Sweden and Poland have been moved from Aviva Stadium to Saint Petersburg.

The last-16 game scheduled for Dublin has been switched to Wembley Stadium in London.

Speaking on The Week In Politics, the Taoiseach expressed his disappointment at losing the matches in the circumstances and questioned UEFA's approach at a time of rising Covid-19 cases in Europe.

He said: "I thought UEFA were out of order, quite frankly, putting that condition on countries.

"I thought UEFA were out of order quite frankly."@MichealMartinTD says UEFA has made the wrong call in taking Dublin's #Euro2020 games away.#RTEtwip pic.twitter.com/A1UZUWipBg

"If look at what is happening all over Europe in terms of the B117, and in terms of the high incidence in European member state countries, to sort of put obligations on countries to force spectators in, prematurely in my view, is the wrong call by the footballing authorities."

He added on why they did not make the commitment for the tournament: "I never thought it was a realistic proposition if I'm honest. I think we need to learn from previous experiences."

More restrictions will be eased tomorrow in Ireland including outdoor sports facilities such as golf courses and tennis courts, but there is no definitive date for when people can attend events.

He has set a target for the end of the summer for that to change: "It is difficult for people. I understand that. I want to be at a match.

"There is nothing I would love more than to be at a club championship game (Gaelic Games) at some time during the summer.

"That may happen towards the end of the summer. We will look at all those things." 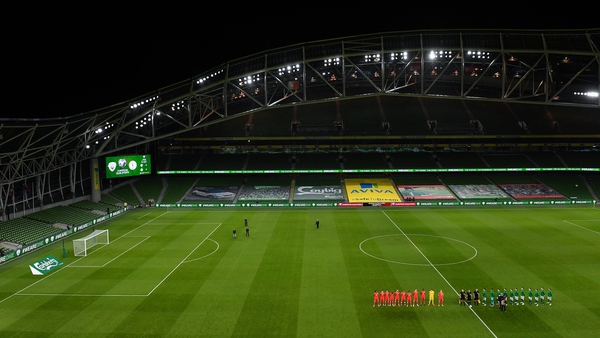