Dublin's Euro 2020 games have been moved to Russia and London as the FAI and the Government were unable to guarantee spectator attendance.

The three Group E matches featuring Slovakia, Sweden and Poland have been moved from Aviva Stadium to Saint Petersburg.

UEFA have confirmed that the last-16 game scheduled for Dublin has been switched to Wembley Stadium in London.

Minister of State for Sport Jack Chambers confirmed to RTÉ the games were gone before UEFA announced the decision.

"Obviously we're disappointed that this will happen but we have to be honest about what's possible in the pandemic. We will have spectators back at games this summer. To do 11,000 in June as a starter event would be an extraordinary step up."

UEFA's executive committee is meeting today to finalise plans after Bilbao and Dublin could not guarantee fan presence at matches, with Seville replacing Bilbao as a host city.

Nine of the 12 host cities had already confirmed their venues will be at least 25% full for June's delayed European Championships, the minimum capacity UEFA will accept.

Munich was the third host city that had been unable to offer UEFA the fan guarantees it needed but a new plan to allow at least 14,500 into the 75,000-capacity Allianz Arena has been approved despite rising infection numbers in the country. Germany are scheduled to play all three of their group games in Munich.

Mr Chambers said it has been "well flagged in the last number of weeks" that they were not able to give the assurances of quarter-full stadia.

He told RTÉ's Today with Claire Byrne the Government are trying to reopen a lot of society, but "being able to leapfrog" into having 11,000 people in one place and giving assurances around that "wasn't possible at this point".

He said they had "always hoped" that the games could go ahead, and that a phenomenal amount of work has taken place over the last number of years to put this in place.

Mr Chambers said he would be confident that UEFA will use the Aviva in the future, and that there is engagement between the FAI and UEFA "on the broader piece on this".

After meetings with top ranking UEFA officials, there is some confidence in the FAI that the Aviva will host a top European final before 2025, such as Champions League, Europa League or Women's Champions League.

FAI chief executive Jonathan Hill ackowledged how disappointing the news would be for football fans int he country.

"This is of course really disappointing news for Irish sport and for everyone who wanted to showcase Ireland to the world this summer.

"Since 2014 and the bid win, the excitement around EURO 2020 has been growing and I know how much everyone was looking forward to hosting four outstanding fixtures at the Aviva Stadium in June."

UEFA President Aleksander Čeferin said: "We have been working diligently with the host associations and local authorities to ensure a safe and festive environment at the games and I am really pleased that we are able to welcome spectators at all matches for a celebration of national team football across the continent."

Seville has replaced Bilbao as a host city, with the 60,000-capacity La Cartuja stadium, which has this year hosted two Copa del Rey finals plus the Spanish Super Cup final, expected to host all three of Spain's Group E games plus a last-16 match.

UEFA has sold more than 2.5 million tickets for the tournament, though has kept the window for refunds open. All tickets for matches in Bilbao and Dublin will be cancelled. All impacted ticket buyers will receive a full refund for the face value of their cancelled tickets. 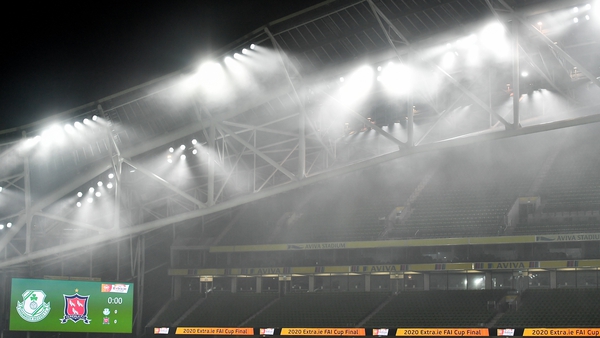