Argentina president Alberto Fernandez declared three days of mourning after the passing of Diego Maradona, with fans worldwide paying tribute to one of the most iconic sportspeople of all time.

Maradona died aged 60 after years of drug and alcohol problems.

Thousands of mourners, many in tears, and many wearing the World Cup winner's number 10 Argentina jersey, gathered in streets and at stadiums around Buenos Aires in a spontaneous celebration of the player and manager's riotous life.

Tributes poured in from around the world as supporters, players and government leaders from South America to Europe and Asia marked the passing of an undisputed maestro.

Read more
Tributes to a diminutive football colossus
When Diego Maradona sparkled at Lansdowne Road
Liam Brady: 'He could do everything'
Images of an extraordinary life

The outrageously skilful Maradona, widely remembered for leading Argentina to glory in the 1986 World Cup, died of a heart attack while recovering from surgery to remove a blood clot on his brain.

Family members were summoned to Maradona's home north of Buenos Aires before his death was announced, triggering a wave of grief across the country and worldwide.

Lionel Messi, Argentina's modern-day superstar, led the tributes as he said: "He has left us but he will never leave us because Diego is eternal."

Brazilian legend Pele, 80, constantly compared with Maradona in the debate over football's greatest player, said he hoped they would one day "play together in the sky". 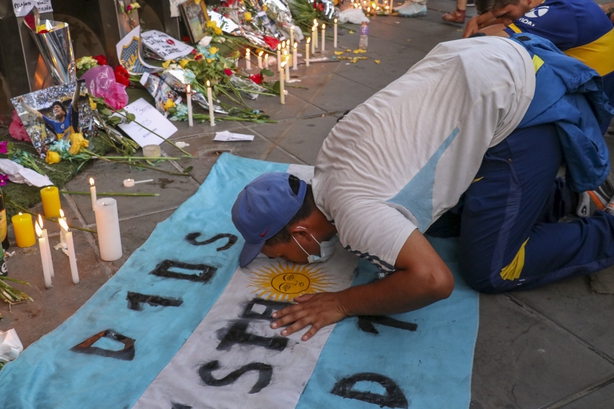 Hundreds of people were already queueing outside the presidential palace in Buenos Aires when Maradona's coffin arrived late on Wednesday to lie in state during a three-day period of national mourning.

Despite major coronavirus problems in Argentina, with more than 1.3 million cases, fans gathered at landmarks including Buenos Aires' Obelisk monument and Argentinos Juniors' Diego Armando Maradona Stadium, the club where he started his career.

In probably his most famous moment, he leapt and used his fist to score past England's Peter Shilton in the 1986 World Cup quarter-finals, memorably describing the goal as "a little with the head of Maradona and a little with the hand of God".

Minutes later, he weaved through six English defenders from the halfway line to score an unforgettable solo second which was later honoured as FIFA's "goal of the century".

The two contrasting goals perfectly encapsulated the mixture of brilliant skill and often outlandish behaviour that ran through Maradona's life. 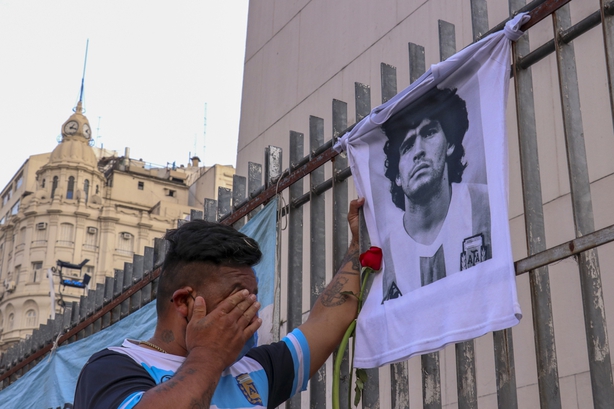 Maradona's career was crowned by his performances at that World Cup, when he captained Argentina to glory.

After dismissing England he scored twice in the semi-final against Belgium, slaloming past four defenders for his second, and set up the 86th-minute winner in the final against West Germany.

It was to prove the highlight for Maradona, who inspired Argentina to the 1990 final only for West Germany to take their revenge. In 1994, after an infamous, eye-bulging goal celebration against Greece, he failed a drugs test and was sent home in disgrace.

In recent years, Maradona, reduced to hobbling by the ravages of his career and lifestyle, had coached in the UAE, Mexico and Argentina without ever hitting the heights of his playing days.

Maradona married his long-time girlfriend Claudia Villafane in 1984. They had two daughters, Dalma and Gianinna, but the relationship was punctuated by Maradona's extra-marital affairs and they divorced in 2004.

He also had a son, Diego Junior, born in Naples in 1986, although he only acknowledged paternity in 2004.

In 2000, FIFA ran an online Player of the Century poll. Maradona gained 54% of the vote and Pele was second with 18%. FIFA declared them joint winners. 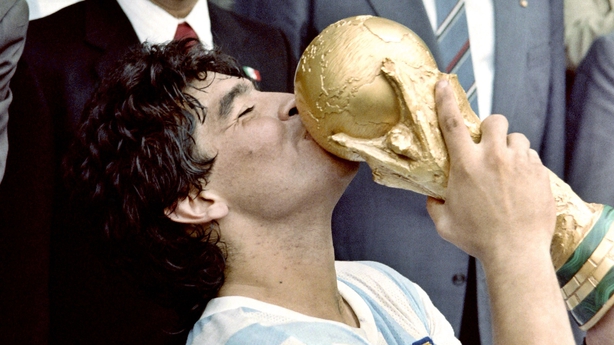