Six years before Diego Maradona carried Argentina to World Cup glory in a whirlwind of inspiration, he graced the Lansdowne Road pitch.

The 16 May 1980 saw the Republic of Ireland welcome the reigning world champions to Dublin for a friendly international in what was Eoin Hand's first game in charge as caretaker manager.

Among the ranks of Argentinian talents was a certain Maradona, who sadly passed away today at the age of 60.

In May 1980, he had not yet turned 20 and was still based at his home club Argentinos Juniors. He had been part of the Albiceleste squad that had faced Ireland at the same venue the previous year in what was an unofficial UNICEF charity match. However, on that occasion, the up-and-coming teenager had also been a half-time substitute.

Twelve months on and he was a starter and was a talent the Irish players had an inkling about.

"We did know before the game that there was a fella who was special if you like and it didn't take long to show what he could do," former Ireland striker Don Givens tells RTÉ Sport of his memories of playing in that 1980 friendly. 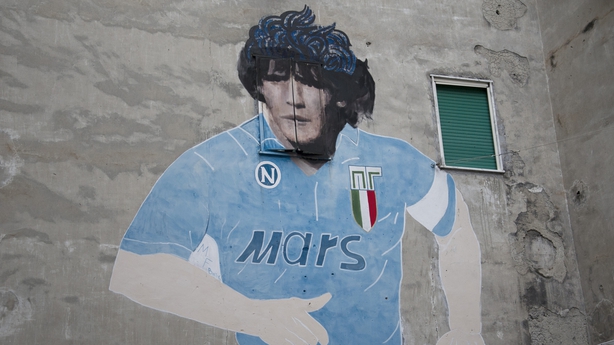 "One of the things I could remember was that at one point, they got a corner and I came back and somebody said to me, 'Pick up the little fella there'.

"The ball comes over and I was usually quite decent in the air and he just jumped above me and got a header in and I couldn't believe it.

"I looked around to see who it was and it was him and he was only about five foot seven is he? That stood out for me straight away."

Maradona would provide the assist for the winning goal as Argentina won 1-0.

Result aside, Givens feels privileged to have shared the same turf as a player of that calibre: "It was a privilege. Luckily I played reasonably often for the international team and it was very, very good to be playing against the quality of people like that."

While he did not cross paths with the legend in later years, the fact that the Limerick native moved to Switzerland to play for Neuchâtel Xamax meant Givens was able to follow Maradona's exploits in Napoli closely later in the '80s.

"When I was in Switzerland, I saw lots of the Italian football on the television and he just carried the Napoli team to win the league," Givens says of a player, alongside Pele, who he ranks as the greatest to have played the game.

"He was unbelievable. There might have been or two other players in that Napoli team that I could name but not many of them, and he was different class."