Global icon Diego Maradona captured the hearts and minds of millions. After his death today in Buenos Aires at the age of 60, the world was quick to recall his enduring impact.

Maradona was the inspiration for Argentina's World Cup success in Mexico in 1986. He also led the country to the final of the 1990 tournament in Italy and managed them in South Africa in 2010.

"Goodbye, Diego," the Argentine Football Association tweeted. "You will be immortal in every heart of the football planet."

Maradona lined out for Argentinos Juniors, Boca Juniors, Barcelona, Sevilla and Newell's Old Boys during his mesmerising career, but will be best remembered by many for his time spent in Serie A with Napoli.

The world awaits our words but there are no words to describe the pain we're going through. Now is the time to grieve.
Diego 💙 pic.twitter.com/40TTOIDNQ4

Thank you for everything, Diego pic.twitter.com/bJ9l3ixY7A

They say his body has passed.

But God will never leave us.

His 'Hand of God'’ goal against England in the 1986 quarter-finals earned him even more fame, although he followed up by scoring the "goal of the century", a remarkable solo effort, in the same game.

Gary Lineker, who played in the England side paid his own pun-heavy tribute.

Reports from Argentina that Diego Armando Maradona has died. By some distance the best player of my generation and arguably the greatest of all time. After a blessed but troubled life, hopefully he'll finally find some comfort in the hands of God. #RipDiego

Pele, who alongside Maradona often tops polls for the accolade of greatest footballer of all time, posted on his official Twitter account: "What sad news. I lost a great friend and the world lost a legend.

"There is still much to be said, but for now, may God give strength to family members. One day, I hope we can play ball together in the sky."

Juventus forward Cristiano Ronaldo commented on Instagram: "Today I bid farewell to a friend and the world farewells to an eternal genius. One of the best ever, an unmatched magician. Leaves too soon but leaves a boundless legacy and a void that will never be filled. RIP. You will never be forgotten."

Argentina forward Lionel Messi wrote on Instagram: "A very sad day for all Argentines and football. He leaves us but does not leave, because Diego is eternal. I take all the good moments lived with him and send condolences to all his family and friends. RIP."

Former players and now pundits Liam Brady and Graeme Souness enjoyed spells in Italy while Maradona was the 'God of Naples'.

Brady told RTÉ's Drivetime: "He was like a rubber ball, he had a very low centre of gravity, he could go any direction, he could twist and turn. He had great vision of the football field, he could see a pass, he could dribble, he could actually do everything."

Souness recalled: "He was tiny but he was fearless. There were players around at that time who were known to be over physical but he was an absolute warrior and ridiculously brave. He'd get kicked but he would come back for more. There have only been a handful of players in history who have been blessed with his ability. He was unique."

"Unique", but not unsurpassed in the view of the former Sampdoria midfielder, who added: "He has an argument for being the greatest player ever, I personally think it is another Argentinian (Messi) but that is only down to longevity."

Cant quite believe DM has gone. Hard to process. He always seemed indestructible. I had 10 hours with the man!! I touched his left foot. We did our best to show the world the man, the myth, the fighter he was. The greatest #legend #DiegoMaradona @MaradonaMovie #Diego #maradona pic.twitter.com/4BSULN9rdt 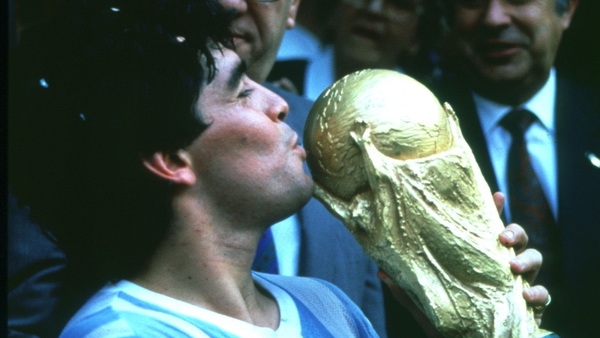