Dundalk will face Arsenal, Rapid Vienna and Molde in the group stage of the 2020/21 Europa League after today's draw was made in Nyon, Switzerland.

The Louth side have also confirmed that their three home games in the group will take place at the Aviva Stadium.

The Lilywhites took their place among the 48 clubs in the hat after yesterday’s 3-1 victory over KÍ Klaksvik of the Faroe Islands and were always likely to get a difficult draw having been placed in Pot 4.

The glamour game in Group B will be against Premier League side Arsenal, while matches against Austrian club Rapid Vienna and Norway's Molde may offer a better chance of earning some positive results.

Both sides, however, will be formidable in their own right.

Vienna, drawn from Pot 2, got through last season's group stage, falling to eventual finalists Inter Milan in the round of 32, and currently occupy second place in their domestic league.

The two-time Cup Winners’ Cup runners-up entered UEFA Champions League qualifying but lost out to Gent in the third qualifying round.

Molde made it from the first qualifying round to the Champions League play-offs, missing out on a return to the group stage for the first time since 1999/2000 following an away-goals loss to Ferencváros.

They won their fourth Norwegian title in 2019 in their first full campaign under Erling Moe, who was assistant to his predecessor Ole Gunnar Solskjær until he left for Manchester United.

In 2013, the Norweigan club got the better of Sligo Rovers in the second qualifying round of the Champions League.

Elsewhere, Tottenham have been drawn against Bulgarian side Ludogorets, LASK of Austria and Royal Antwerp from Belgium in Group J, while Leicester City will take on Braga of Portugal, Greek side AEK Athens and Zorya Luhansk from Ukraine in Group G.

Both Scottish clubs will face ties against sides with great European pedigree, with Celtic facing seven-times European Cup winners AC Milan and the Rangers taking on two-time champions of Europe Benfica from Portugal.

There is then a three-week break until Matchday 4 on 26 November, with the final three games run off on another three consecutive weeks. 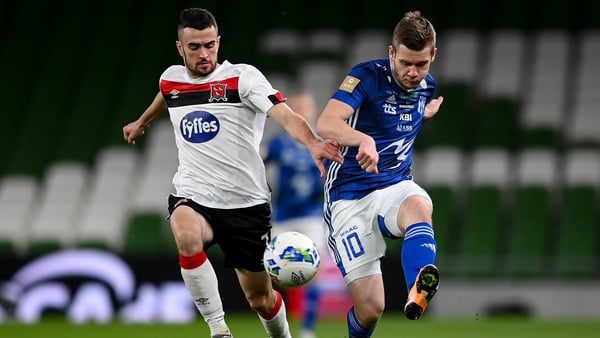 Dundalk to play nine matches in a month in pile-up