Dundalk will play nine matches in 28 days following their qualification for the Europa League as they race to finish their SSE Airtricity League season amid European commitments.

Filippo Giovagnoli's side will play at least 14 matches between now and the end of the year, and that could be 16 if they are successful in the FAI Cup.

The Lilywhites progressed to the Europa League knockout stages at the expense of KÍ Klaksvik of the Faroe Islands at the Aviva Stadium.

They will now play five matches now before they start their group phase, beginning with Finn Harps on Sunday.

Giovagnoli made 10 changes to his side last Sunday when defeated 4-0 by Shamrock Rovers as he felt they needed rest ahead of European action. He will rotate his squad over the coming months.

Dundalk's league trip to Derry was postponed at the end of August due to international call-ups. That match now takes place on 19 October, three days before a possible Europa League group game.

A match with Cork City was postponed to allow them better preparation time ahead of their third round qualifying match against Sheriff Tiraspol, which they won on penalties to qualify for the play-off.

The second round of Europa League group games is down for 29 October.

This could see the Lilywhites' final league match of the campaign, against Sligo Rovers, also moved back, to Sunday, 1 November.

Because the final round of league games have to finish at the same time and on the same day, it would mean all fixtures would be moved to the Sunday.

It's not possible to extend the season because the promotion/relegation play-off is down to be played on the weekend of 8/9 November.

The impact of the scheduling will weigh heavily on the league. Games against the likes of Harps and Cork will impact on the relegation picture if the Lilywhites opt to rest players. 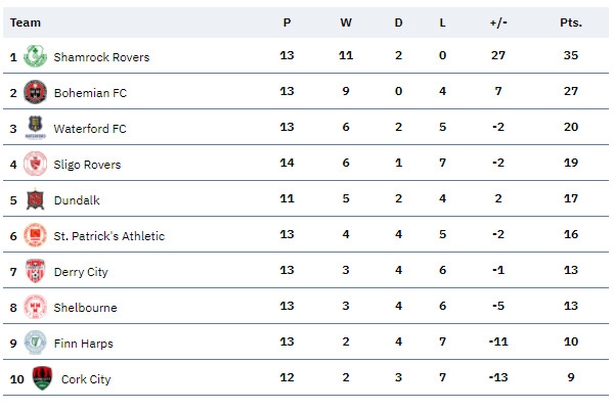 However they too must put a concentration on the league as European football is far from guaranteed. Waterford FC, Sligo Rovers and St Patrick's Athletic are all in the mix for a top four finish, so the Louth side can't afford to take their foot off the gas.

Even after the league campaign culminates things may remain hectic.

Dundalk, who were beaten in last year's FAI Cup final by Shamrock Rovers, travel to Bohs in the quarters of this year's edition.

If they make it back to the decider, they could have two Europa League games and a cup final in the space of seven days.