Dundalk have qualified for the group stages of the Europa League following a hard-fought 3-1 victory over KI Klaksvik at the Aviva Stadium.

The Lilywhites took a 1-0 lead into the break thanks to a 33rd-minute Sean Murray header, and were two up within minutes of the restart thanks to a close-range Daniel Cleary effort.

But the Faroe Islands side made it far from straightforward for the Irish champions as they pulled a goal back in the 66th minute following a fine strike by Ole Erik Midtskogen.

The visitors looked to get back into the game but were thwarted by a string of fine Gary Rogers' saves, and the home side made sure of the victory in the 79th minute when Daniel Kelly raced clear to slot home the deciding goal.

A lively start to the game with both sides going on the attack in the early exchanges with the visitors working the ball deep into Dundalk territory twice inside the opening two minutes.

But Dundalk sprang into life with two chances of their own as Patrick Hoban and Patrick McEleney both had sight of goal, the former headed just wide before the latter curled a decent effort on goal but it was parried away.

But then the game just appeared to lose all that early tempo with two teams cancelling each other out, while Dundalk’s lack of quality proved encouraging for the Faroe Islanders.

And it was the visitors who were playing the more composed football without really threatening, as Dundalk were lacking leaders to stamp their authority in midfield, with Greg Sloggett the only man in white showing for the ball.

Darragh Leahy was trying to push his side forward from the left-back position and then in the 25th minute some good work up that flank led to a free kick just outside the box as McEleney drew the foul.

A superb ball was whipped across the face of the goal and while Hoban appeared to make contact, the ball was cleared at the far post.

But it was encouraging for the home side, playing 60 miles away from their official Oriel Park residence.

And then in the 33rd minute they broke the deadlock.

A trademark Dundalk move; a long inviting ball from way out on the right flank by Sean Hoare, and Hoban did well to help the ball goalwards, however, it was the alert Murray who gambled with his run behind the defence before helping the ball past the advancing keeper with a fine header.

The goal sparked the Lilywhites into life as they pushed for a second, however, despite their higher intensity, they were unable to create anything of note, with Murray’s 39th-minute hopeful effort from 25 yards, which flew wide to the keeper’s left, the best they could manage.

The best that the visitors could muster was a long throw into the box two minutes before the break, but it was easily dealt with as Dundalk looked very comfortable behind the ball.

It took just two minutes of the second half for Dundalk to double their lead and it was a goal gifted by KI keeper Kristian Joensen who flapped at a corner drilled in from the left.

An attempted punch sent the ball back towards his own goal with Hoban and Stefan Colovic both looking to get on the end of it.

But it was centre-half Cleary who kept his composure as the ball hopped up at the edge of the six-yard box and he made no mistake lifting the ball into the back of an empty net to put Dundalk firmly in control of the tie.

The Klaksvik side had no option now but to push forward as they looked to get back into the game and they were nearly right back in the game in the 58th minute as a sloppy Sloggett pass was intercepted.

The ball was eventually rolled into the path of Patrik Johannesen who smashed a low curling effort towards Rogers’ left but the keeper got down well to get a strong hand on the ball to push it out for a corner.

Two chances followed inside a minute as Jakup Andreasen saw two attempts at goal blocked, the second one cleared off the line by Brian Gartland.

Dundalk struggled to get out of their own half for the next five minutes as KI followed up with another chance on goal following a fine cross-field ball to the back post, however, substitute Boris Došljak sliced wide.

Then the pressure reaped its reward as a hopeful ball was held up nicely on the edge of the box by Joannes Bjartalio, who rolled a clever reverse pass into the path of the arriving Midtskogen who took a touch before smashing it past the Dundalk keeper from 20 yards out.

And it was no more than the visitors deserved as they had dominated play since Dundalk's second goal.

With twenty minutes remaining, Dundalk were handed another gift by the visiting keeper, this time his clearance played right to the feet of Duffy on the edge of the box.

Alert defending put pressure on the ball as the Dundalk man lined up his shot, allowing Joensen to make amends with a standard save.

Dundalk were now just 15 minutes from the lucrative group stages but they were making hard work of it as Rogers was once again called into action, this time batting away a stinging effort from Bjartalio after a long ball was not dealt with.

And then it all changed.

Amidst another KI attack, where they danced their way through the Dundalk defence, setting up Patrik Johannesen with a golden chance to restore parity, the midfielder fluffed his lines, allowing the home side to clear.

With the entire side pushed on, Dundalk countered at pace and Kelly was sent clear with just the keeper to beat.

The substitute took his chance early and made no mistake as he rolled the ball past the advancing keeper to restore Dundalk’s two-goal lead.

With ten minutes to save the tie, another penalty box scramble led to another Rogers save as he got a hand on Odmar Faero’s close-range effort.

But that was as close as KI got in those remaining minutes as Dundalk finished strong to see out the 90 and four additional minutes to progress into Friday’s draw with the group stages of the tournament. 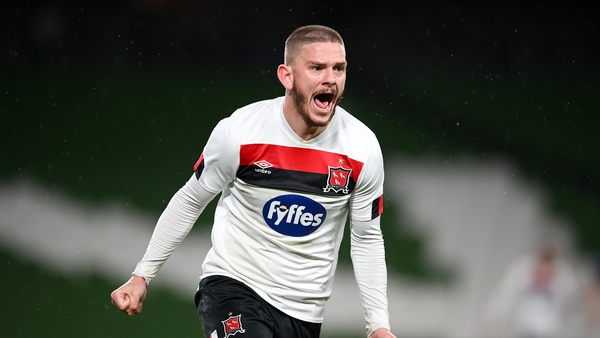