Alan Reynolds says he does not want the Dundalk job after a 'tough week' for the Louth club.

There has been much speculation as to who might take the reigns at a club that has claimed five of the previous six Premier Division titles.

But, after a 3-1 defeat to Sligo Rovers yesterday at the Showgrounds, former Waterford manager Reynolds says he is not interested.

"No, it's not a job that I want," was his reply when he was asked by RTÉ Sport's Daragh Moloney about the vacancy.

"I haven't spoken to John (Gill) on it. I'm just here to help the club and to help the players. We'll just see where it goes.

"It was only late on Thursday night that we were asked to step in, so really there's been no time. We just came in on Friday, trained, and then travelled.

"We'll regroup, and obviously the owners have decisions to make. I'm sure they're thinking about that.

"We'll come back in and train until we hear otherwise. I'm sure they're working away in the background, and they need to appoint the right man.

"They'll take their time doing it, I'd say." 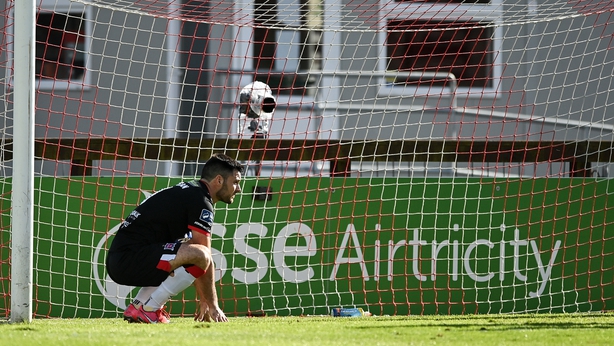 Names like Robbie Keane and Keith Long have been thrown around as a potential replacement, although Reynolds wouldn't be drawn on specific rumours.

But he pointed out that the job is still a very attractive one, despite their recent form, which has seen the Lilywhites claim just one win in their six games since the return.

"Plenty of people will want this job," he continued.

"It's a great club, and there are some very good players there.

"Obviously Vinny going has hurt a lot of the players. I'm not sure what happened on that end of it, but the lads are disappointed because they were really fond of him in the club."

For Reynolds' opposite number on the night, Liam Buckley, it was another encouraging result.

Four wins in five matches have lifted the Bit o' Red into the top four in the table.

"We've done well in the last few games," he said.

"That said, I've said this before, there are no easy games in this division. There are very little in a lot of teams.

"Outside of that we've done really well, we've worked extremely hard and their fitness has been really good. Long may that continue."