Bohemians boss Keith Long distanced himself from speculation linking him to the vacant Dundalk job after watching his team trim the gap to table-toppers Shamrock Rovers to just two points.

The Gypsies kept up their terrific post-break form as they defeated St Pat's 2-0 at a windswept Dalymount Park on Saturday afternoon.

Long is one of a few names that's been mooted to replace Vinny Perth in the Lilywhites hot seat but he cooled such talk and said he's completely focused on Bohs' looming challenges at home and in Europe.

"Speculation is only natural when a job becomes available," he told RTÉ Sport's Tony O'Donoghue.

"First and foremost it's disappointing to see another manager lose his job like Vinny Perth, and the association that he's had and the job he's done with Dundalk. I think that has to be recognised too.

"That's all speculation. I'm contracted to Bohemians. I'm the manager of this club and we're getting on with our jobs." 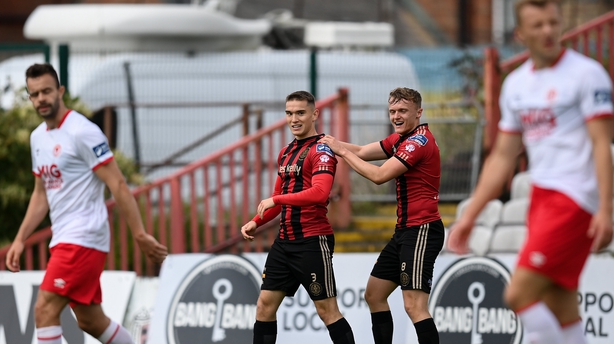 First-half goals from Anto Breslin and Andrew Wright were enough to sink the Saints as Bohs. They're now prepping themselves for Thursday's tough Europa League clash in Hungary against Fehervar on Thursday.

Their next league game is against bitter rivals Rovers in what now has to be described as a potential title showdown but Long isn't looking that far ahead.

"We've got to look after Europe first this week," he stressed.

"We've got a big game on Thursday against Fehervar. They're 250 places above us in the European club index so that shows you the size of the task that we have but we want to represent the club well in Europe, we want to try and do well if we possibly cam.

"It's a mammoth task really when you think about the level of opposition we're going up against.

"We've put ourselves in a nice position [in the league]. We've come back and won four games so we can't ask any more from the players.

"We set the team up well today. I think we probably should have won the game by a couple of more goals with the chances we created. It was disciplined by the boys - we controlled the game without the ball as well as with the ball at times and particularly on the break I thought we looked dangerous."