Sligo Rovers made it four wins from their last five matches as they impressed against a struggling Dundalk at the Showgrounds in the SSE Airtricity League Premier Division.

The Lilywhites missed a first-half penalty as the Bit O'Red led at the break courtesy of a superb Regan Donelon set-piece.

The champions, on their first time out without former boss Vinny Perth, fell further behind in the second period when Ryan de Vries and Junior both registered their first goals for Rovers.

Stefan Colovic did notch a reply for Dundalk from another spot-kick, but Sligo held on for what was their fourth victory of the season.

Under the stewardship of caretaker duo Alan Reynolds and John Gill, it was the visitors who should have gone ahead early on.

The unmarked Daniel Kelly shot wide despite being left unmarked at the back post after the winger latched on to a Michael Duffy cross from the left.

Rovers' late winner against Waterford four days previous came from a set-piece, and Liam Buckley's charges were to profit from another well struck free-kick as they hit the lead 13 minutes in.

Darragh Leahy tangled with Ronan Coughlan at the edge of the area before Donelon sent his bending effort around the wall and beyond Gary Rogers.

Regan Donelon puts @sligorovers ahead against @DundalkFC at The Showgrounds | Subscribe to watch League of Ireland games at https://t.co/iBWPVNiVF9 #RTESoccer pic.twitter.com/f4i4UqVvOw

Rovers nearly doubled their lead on 20 minutes when Junior showed strength to hold up play, finding De Vries, with the New Zealander flashing his effort across the face of goal.

Sligo had to rely on bravery from the returning Kyle McFadden just short of the half hour, with the Ramelton man diving to take Kelly's volley off Ed McGinty’s goalline after the Rovers goalkeeper had misjudged Daniel Cleary’s cross.

The visitors had accumulated plenty of possession at this stage and were gifted an opportunity to level proceedings on 33 minutes when Teemu Penninkangas was adjudged to have handled Cleary’s cross inside his own penalty area.

Hoban was favourite as he faced McGinty from 12 yards, but the young Scot pulled off a magnificent save as he got in front of the Galway native’s powerful drive.

The second half was just five minutes old when Rovers had their second.

Skipper David Cawley started the move with a neat one-two between himself and Coughlan. The former’s cross from the end line reached De Vries on the far side, who arrowed a low drive past Rogers for his first goal for the Yeats men.

Incredibly, Sligo had their third on 62 minutes. Rogers came to meet Cawley’s outswinging free, only for Junior to make the most of the space behind the netminder, heading the ball over Rogers’ reach for what was his maiden goal for his new club.

It's 3-0 as Junior heads home for @sligorovers against @DundalkFC | Subscribe to watch League of Ireland games at https://t.co/iBWPVNiVF9 #RTESoccer pic.twitter.com/nhs0cxOIty

Dundalk pulled one back with 14 minutes to go as they threw everything at their opponents, with substitute Colovic converting from the spot after referee Rob Hennessy saw a push from McFadden on a Dundalk player. 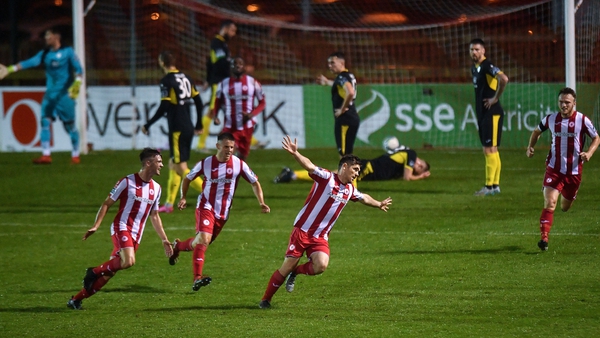 Sligo up to third after seeing off nine-man Harps 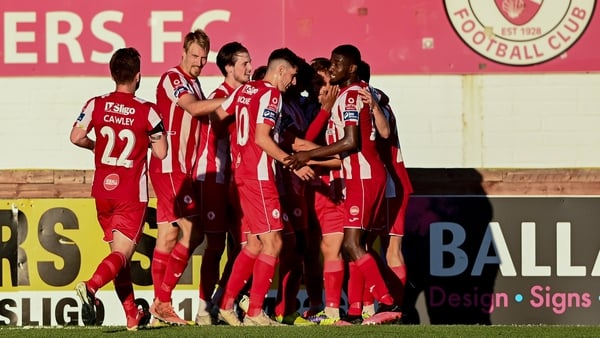