The funeral of former Republic of Ireland manager Jack Charlton has taken place in England today.

The cortege passed through his hometown of Ashington in Northumberland this morning, where people had gathered since 10am.

Applause broke out as it made its way to his birthplace.

A pallbearer walked in front of the cars for a short distance before the cortege travelled back to Newcastle for a private service at West Road Crematorium.

The crematorium service had a limited attendance due to ongoing public health restrictions amid the coronavirus pandemic.

Charlton was remembered in Ireland as large numbers of Irish supporters gathered at Walkinstown roundabout in Dublin.

Several hundred people also took part in a tribute in Ballina in Mayo.

They observed a minute's silence at 12:29pm before the formal unveiling of a new mural of Charlton, which has been painted on the wall of a building overlooking the River Moy. 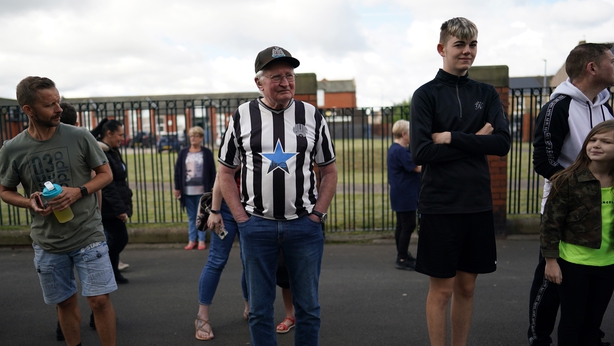 Charlton led Ireland to the 1988 European Championship and the 1990 and 1994 World Cups. The Football Association of Ireland had called on all fans to wear green in his memory.

Affectionately known as Big Jack, the Northumberland native took over the reins as Ireland manager in 1986.

He brought unprecedented success to the national side as he guided them to their first major finals at Euro 88 and two more in the space of ten years, qualifying for the World Cup in Italy in 1990 and four years later in 1994.

To coincide with his funeral in England, radio stations in Ireland played Put 'Em Under Pressure at 12.30pm in a nationwide tribute.

The FAI said yesterday that nearly 20,000 people had signed the association’s virtual book of condolences on its website.

Speaking on RTÉ's Morning Ireland, Quinn also said Charlton was a great family man who brought joy and fun to "what we did as players".

Quinn said he was a "footballing force of nature", but furthermore "he showed care and attention to players on and off the pitch, he was so human and caring".

Quinn said he had an incredible effect on the country at a time the team and country had been struggling.

Yesterday, to commemorate his contribution to both Ireland and England, An Post and the Royal Mail collaborated for the first time to create a postmark in his honour.

The postmark will be used on all stamped mail in both countries until 9 August.