Dundalk manager Vinny Perth says the League of Ireland still has a long way to go to catch up with certain areas of the Irish League.

That's despite the Lilywhites' 6-0 humbling of the northern champions Linfield on Monday night.

There has been much talk of an all-Ireland league, with businessman Kieran Lucid holding discussions with clubs on both sides of the border this summer.

The Irish League recently cooled talk of the joint venture though, and the gulf in class at Oriel Park will do little to bring the new concept any closer.

"What they do better than us is the grounds, the crowds, the match-day experience," the Dundalk manager told RTÉ Sport's Adrian Eames.

"We'd have to get up to their level.

"Linfield would have been, at the very minimum, third in our League (this season). I think they're a very strong side with everybody fit.

"There's not a huge gulf between the top teams. Their lower teams could struggle, because we've more of a technical game than what they play." 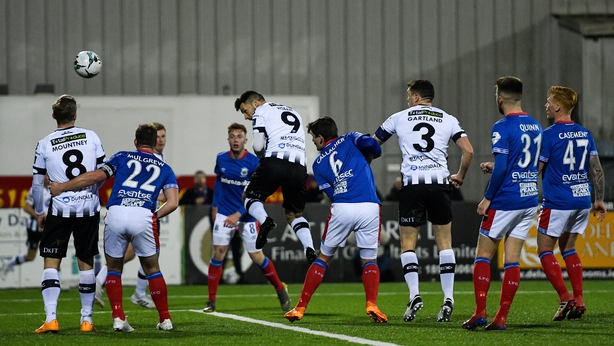 Overall though, Perth says he'd like to see the two leagues eventually reuniting into one competition.

"I think tonight will dent it, in the sense that people up the north will be scared of it.

"Is it a long way off? I don't know. I think both leagues need to be improved. Theirs is not strong enough, and their European results would back that up.

"You look at the Irish international team, and the amount of players that have played in our league tells you that if we invest in it, we might actually eventually make our national team stronger.

"Jack Byrne should be the star of Irish football at the moment, and he's not... he's not on billboards. Our own players are champions of Ireland. Around this small town, they're well known, there are flags here, there, and everywhere.

"But we need to do that part of the game better.

"I definitely think an all-Ireland league would help both leagues. As a club we'll push for that, because we need to improve."