Dundalk brought the curtain down on a magnificent season by hitting Linfield for six to win the very first Unite the Union Champions Cup in some style at Oriel Park on Monday night.

After a hard-fought 1-1 draw in the first leg at Windsor Park on Friday night, the organisers would have been hoping for another tight affair here but Vinny Perth's side produced a ruthless display, going into the half-time break 3-0 up thanks to goals from Georgie Kelly, Brian Gartland and Jamie McGrath.

That moved them 4-1 ahead on aggregate and they showed no let-up in the second half with Robbie Benson, Georgie Kelly and Patrick Hoban all adding further goals to complete a resounding win for the SSE Airtricity League champions.

6' GOAL! Dundalk 1-0 Linfield - It's a lightning counter from the hosts and Georgie Kelly is perfectly positioned to slot home from close range #RTEsoccer pic.twitter.com/BZiGClJmH1

The victory secures the Lilywhites a further €50,000 in prize money and the Unite the Union Champions Cup will sit nicely alongside the league trophy, EA Sports Cup and President's Cup in the Oriel Park trophy cabinet for the next 12 months.

Perth made seven changes to the side that played in Belfast 72 hours earlier.

Aaron McCarey was handed a rare start between the posts while Georgie Kelly was tasked with leading the attack. Benson also started ahead of his expected departure to St Patrick's Athletic.

David Healy had to plan without star man Shayne Lavery who is currently on international duty with Northern Ireland for their Euro 2020 qualifiers against Holland and Germany.

Andy Waterworth came in to replace him while regular goalkeeper Rohan Ferguson was recalled after sitting out the first leg.The match was refereed by French official Stephanie Frappart, who was assisted by compatriot Manuela Nicolasai and PFAI Referee of the Year Michelle O'Neill.

The trio took charge of this year's Women's World Cup final and the UEFA Super Cup between Chelsea and Liverpool.

A rapid counter-attack opened Linfield up with just six minutes on the clock. After being set clear by Benson on the left, Michael Duffy turned on the jets to leave Joshua Robinson trailing in his wake.

His cross picked out Daniel Kelly at the far post and when the winger's effort deflected off Jamie Mulgrew's heel, Georgie Kelly was on hand to sweep the ball home.

Jamie McGrath smashed a half-volley over the top shortly after before goal number two arrived just past the quarter-hour mark. Duffy's corner found the head of Brian Gartland and the Dundalk skipper punished Linfield for some scandalous marking by heading past Ferguson.

The hosts kept their foot on the accelerator and they almost added a third in the 18th minute when Daniel Kelly raced onto Gartland's pass but with his namesake Georgie screaming for the ball to be squared, Daniel opted to go for goal and Ferguson made a fine save.

David Healy's side looked shellshocked and without the considerable threat of Lavery, they struggled to make an impression in the final third. Andy Waterworth did pull away to meet a Matthew Clarke cross in the 19th minute but he couldn't test McCarey with the header that followed.

Duffy continued to torment the Linfield backline and he hammered a low shot against the bottom of the post in the 25th minute before teeing Jamie McGrath up for the third nine minutes later.

Ferguson did his best to try and prevent a corner but his clearance fell to the Derryman and he shifted the ball right for McGrath to lash home from 20 yards.

The game badly needed a Linfield goal and they almost pulled one back in the seventh minute of the second half when Mulgrew found space to get a shot away but McCarey did well to push his effort to safety.

Georgie Kelly almost brought the house down with a spectacular overhead kick that whistled just over the top but the majority of the 2,412 in attendance didn't have long to wait for another goal and Benson dinked a beautiful finish over Ferguson to make it 4-0 in the 64th minute before departing to standing ovation shortly after.

Georgie Kelly claimed his second of the night with a classy header after some good work by Daniel Cleary and Michael Duffy and substitute Patrick Hoban got in on the act late on before the final whistle put the Danske Bank Premiership champions out of their misery. 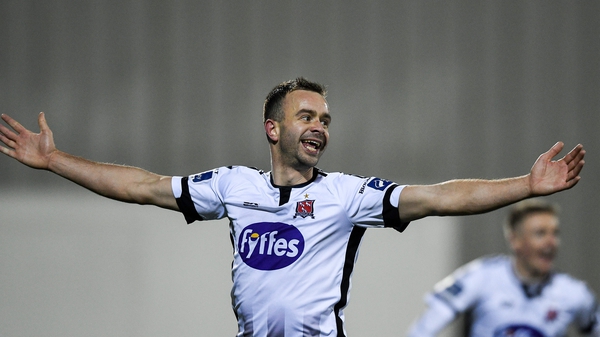