A clash between Luton Town and Middlesbrough wouldn't ordinarily attract the attention of too many Irish fans, but Friday night's Championship opener at Kenilworth Road will hold more than a passing interest among TV viewers this side of the pond.

The visitors begin the season with an away fixture against a Luton side that won League One in some style last season and the presence of Robbie Keane as part of new manager Jonathan Woodgate’s coaching team will be of note to those with green tinted glasses.

Not least as it means the country’s record goalscorer is in for a hectic campaign as he juggles the role with that as Republic of Ireland assistant manager.

"He has made a big impression on the players and the staff already as my assistant coach and this new role will only improve him, which works for Middlesbrough and, most importantly, for Ireland," Mick McCarthy said upon the confirmation of Keane's role on Teeside.

It marks an incredible nine months for the Tallaght man.

Last November, after formally bringing the curtain down on a playing career that yielded 393 goals in 883 senior appearances, Keane was named in McCarthy's Irish backroom team, with his only previous coaching experience a short stint as player-coach at Indian side ATK.

Now he has linked up with a club seeking a return to the Premier League, but the career path has taken some by surprise.

"Definitely not," is Liam George’s succinct response when asked if he foresaw Keane becoming a coach or manager. 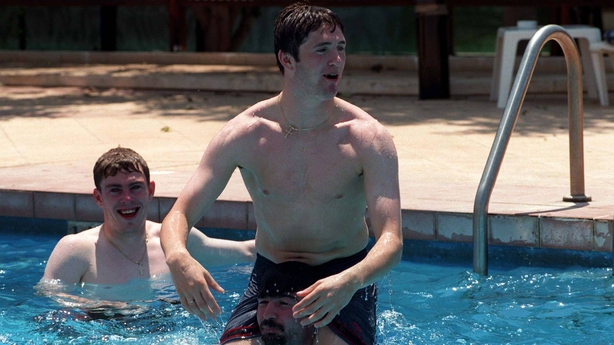 George partnered Keane up front when Ireland won the U18 European Championships in 1998, and while there were some team-mates he could envisage make the transition after playing - "Damien Duff was cut in a different mould. He has that quirkyness, you never knew what he was thinking" - Keane was not one of those.

"With Robbie, what you see is what you get. He is so confident in himself, fearless.

"There was no Plan B for him as a player, he'd never think, 'what if I fail?’. Coaches can’t think like that, which is why I thought he wouldn’t fit the coaching mould."

Former Republic of Ireland defender Stephen Kelly disagrees, believing it was all part of the plan to go down the coaching route.

"Towards the end of his career he expressed an interest in it," says the ex Spurs, Birmingham and Fulham man.

Kelly, who soldiered alongside Keane for club and country, was a group of former Irish players who took their badges at around the same time.

Kelly, Keane, Keith Andrews, John O'Shea and Damien Duff were among those involved. Kelly has gone down the punditry path, but says Keane "was always more tactically astute than people gave him credit for."

McCarthy alluded to Keane's confidence when he revealed that he had put himself forward for the Irish role, delicately describing him as a "cheeky bollocks". When probed further on his decision, it was Robbie's reputation which was a key factor in a youthful squad.

"I think he will have a real affinity with the younger players. All these guys coming through, he's their hero. I think that’s a real benefit for me."

On a basic level, it has been a solid start with Ireland. The Boys in Green occupy top spot in Group D without pulling up any trees, but now he is braced for a more demanding schedule. And a club expecting better things.

Last season they finished one place and one point outside the play-offs. Not surprisingly under the stewardship of Tony Pulis, the Teessiders were tough to break down with the joint-best defensive record in the Championship.

The primary issue was at the other end of the pitch, with Boro mustering just 49 goals in 46 games. Relegated Rotherham enjoyed a better 'goals scored' figure and despite winning four of their last five games, the writing was on the wall for Pulis. The home supporters were fed-up. 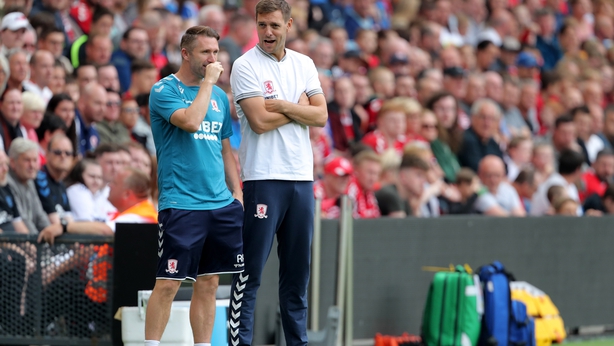 The arrival of Woodgate has lifted club spirits, but summer signings have been very thin on the ground. The £200,000 forked out to West Ham for midfielder Marcus Browne is the only money they have spent thus far ahead of the transfer window closing next week. The main activity has been centered on the exit door.

Aden Flint has boosted the club’s coffers to the tune of £4m after leaving for Cardiff City, while John Obi Mikel has swapped the north-east of England for Turkey. Striker Martin Braithwaite, who featured three times last season for Denmark against Ireland and cost the club a reported £9m two years ago, leaves on an undisclosed fee to La Liga side Leganes after a total of eight league goals for the club.

Woodgate has already stated he will be giving youth its chance, perhaps out of necessity as much as preference, and there are high hopes that defender Dael Fry, who has represented England from U17 right through to U21 level, could follow in his manager’s illustrious footsteps.

The burden of responsibility for finding the back of the net will fall primarily on the shoulders of Congolese striker Britt Assombalonga. The 26-year-old has hit double figure for the past two seasons and Woodgate has said he is "very confident" of keeping hold of his prized asset. Failure to do so could be the difference between the play-offs and mid-table.

After a decorated career, Keane desperately wants to prove he can stand on his own two feet as a coach. That was evident in a tetchy interview with The Daily Mail this week, where Keane was to say the least, forthright.

"What the f***?' 'I'm not a clown. I'm not here to entertain people," the musically-inclined Keane barked when asked whether he would bring some entertainment to the dressing-room.

"A stupid question" was a later response when probed on whether he'd be happy to confront players if necessary.

Robbie needs to take things less seriously, he's got to give himself a little bit of credit

George says the character depicted in the interview is very much at odds with the man himself. If he’s guilty of anything, it could of trying too hard to earn the respect of the players.

"Maybe the Roy Keane effect is in his head, but he’s got to give himself a little bit of credit. There is an aura around us Irish that we can’t be serious.

"He’s guarded because he wants to do well. He’s street smart, one wrong move could have a serious impact on his coaching career. Robbie needs to take things less seriously, he’s got to give himself a little bit of credit."

After the ultra-pragmatic days of Pulis, Keane’s comments are, if nothing else, something of a spark and could fuel the belief that better days lie ahead for a club that spent nine seasons in the last decade in the second tier.

What is his own philosophy on the game?

"It will be getting in people's faces: attacking, expansive football," Keane outlined upon his appointment.

Another pressing point will be just how the 39-year-old will cope with the hectic demands of the Championship and international duty, with Euro 2020 looming on the horizon.

"I think it could work more to his benefit," says Kelly. "As a player, all you want are games. As a coach, Robbie will want to learn as quickly as possible and the constant games will help him. The more games the better you get. "It is a tough schedule undoubtedly, but he will be able for it and determined to succeed."

The alternative view is the relentless pace could rob Keane of time to absorb what he is learning.

"You need to cut your teeth to make mistake," says George. "He is so far in the deep end with Ireland and Boro, he may have no time to reflect.

"How can he develop as a coach if he’s in such an intense environment all the time?"

His former Ireland underage team-mate says he will be rooting for Boro this season and believes Keane can achieve his goals for both club and country.

The former Spurs and Liverpool striker scored seven times against the Teessiders as a player, but his only goal now is to prove his worth from the sidelines. 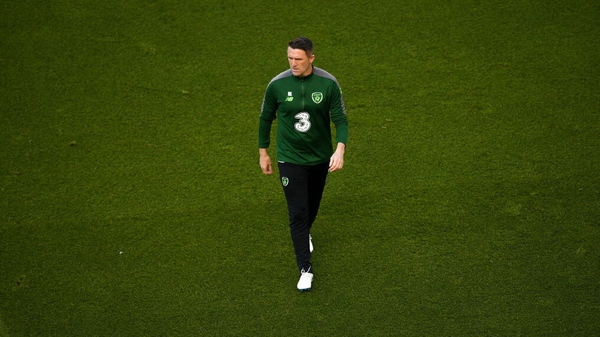