The USA are champions again after a World Cup tournament that reached unprecedented heights.

Stunning goals, dramatic results and plenty of VAR controversy featured prominently at the games in France, with Jill Ellis' side justifying their favourites tag to retain their crown.

RTÉ and TG4 combined to bring the World Cup to Ireland as record-breaking audiences tuned in to see all the action unfold.

So, as the US toast their back-to-back triumph, we take a look at some of the key moments that made up the 2019 Women's World Cup.

Rapinoe squares up to Trump

Suffice to say, she was a power-house on the pitch, but the 34-year-old proved to be a formidable force off the field too. She initiated a stand-off with US President Donald Trump which has cast doubt over whether they will visit the White House as world champions.

"Psssh, I'm not going to the ******* White House," Rapinoe replied when asked about that possibility by Eight by Eight last month. Trump responded to her comment on Twitter, saying "Megan should never disrespect our Country, the White House, or our Flag, especially since so much has been done for her & the team."

Rapinoe stood firmly behind her remark and Ellis says she "wouldn't bet" on the victorious US team receiving an invitation to visit the White House.

The semi-final clash between England and the USA was deemed by many to be the real decider. The sides certainly delivered on those expectations as they played out a thrilling 2-1 encounter which allowed the Americans progress.

Over 315,000 Irish viewers tuned in to RTÉ to see Phil Neville's side bow out of the tournament, while a peak audience of 11.7 million people watched the game on BBC, which makes it the most-watched British television broadcast of the year.

After a month-long tournament, why not finish with what was Lisa Fallon's moment of the tournament. Over to you, Marta...#RTEsoccer pic.twitter.com/Q2VNIk5I6J

Brazil legend Marta, considered by many to be the greatest ever player in women's soccer, made an emotional plea after her side exited the tournament.

With tears in her eyes, she said the success of Brazilian soccer would be determined by the new generations pushing themselves.

"Cry now so you can smile at the end."

An Irishwoman involved in the final

Ireland unfortunately missed out on qualification for the 2019 World Cup, but we did have some Irish representation at the tournament.

Wexford native Michelle O'Neill was was named as one of 48 assistant referees for the games in France, and served in a number of games including the World Cup final.

It was an extraordinary moment for the Irish woman who currently officiates in the SSE Airtricity League and the So Hotels Women's National League. She also worked as an assistant referee at the 2015 World Cup in Canada.

There was plenty of drama as Norway overcame Australia after penalties to book their place in the quarter-finals of the World Cup.

Australia's Alanna Kennedy was sent off, while VAR overturned a penalty decision against the Aussies.

After playing out a 1-1 draw over 90 minutes, the tie went to extra time before penalties were required to separate the sides.

Australia missed their first two spot-kicks, including one from their star striker Sam Kerr. Ingrid Syrstad Engen scored the decisive penalty to send Norway through.

The gaps in prize money between the men's and women's World Cups is an ongoing debate, and one which USA's Rapinoe spoke about on the eve of the tournament.

"I think everyone is ready for this conversation to move to the next step," she told reporters when asked about the chants after Sunday's final.

"I think we're done with the 'are we worth this, should we have equal pay, are the markets the same?'"

The referee blows the final whistle and Sweden deservedly march into the semi-finals, sending Olympic champions Germany not just out of the World Cup, but out of the 2020 Olympics. #rtesoccer pic.twitter.com/DNe5MiL4Mi

Sweden produced a huge shock when they edged out Olympic champions Germany to advance to the semi-finals.

They rallied from a goal down to pull off the 2-1 win, which makes their result even more impressive.

Sofia Jakobsson scored the equaliser before Stina Blackstenius' close-range header put the Scandinavians ahead in the second half.

Germany hadn't conceded a goal up to that point in the tournament, but the Swedes ended that run and dumped them out of the competition.

The defending champions sent out a message of intent when they opened their tournament with a 13-0 win over Thailand.

It was a crushing victory, which included five goals from star striker Alex Morgan. Their celebrations after each goal triggered some accusations of poor sportsmanship, but the US refused to relent when asked if they had any regrets about their actions afterwards.

It was the biggest every victory at a Women's World Cup, surpassing Germany's 11-0 victory over Argentina in 2007. 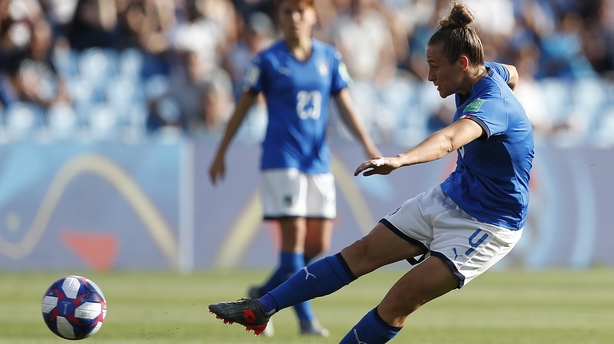 There were some stunning goals at the World Cup, including a long-range effort from Italy's Aurora Galli.

Galli, who was introduced as a second-half substitute, struck twice in her side's 5-0 win over Jamaica. Her first score was particularly impressive, as she smashed the ball home from just outside the box.

A 2-0 defeat in the decider is not the end point that the Netherlands had envisaged, but reaching the World Cup final was a historic achievement for them.

It was a first World Cup final for a side who were crowned European champions earlier in 2017.

And they were made to sweat for their place in the decider. Sweden took them to extra-time in the semi-final after both sides failed to score over 90 minutes. Jackie Groenen scored the decisive goal in the 99th minute as she rifled a low shot into the bottom corner of the net.

They managed to contain the Americans for over an hour in the final, but a Rapinoe penalty and Rose Lavelle strike put the result beyond doubt.

A stunning strike from Lucy Bronze as England put one foot in the semi-finals. The ball is hammered home into the roof of the net as England go 3-0 up.#RTEsoccer pic.twitter.com/8CjzHmC7jn

England boss Phil Neville declared Lucy Bronze to be the "best player in the world" following their quarter-final win over Norway.

His praise for the defender referred to her general play on the night, as well as her stunning goal which helped England to a 3-0 victory.

The goal came in the 56th minute when Beth Mead cut the ball back from a free-kick. Bronze was waiting on the edge of the box and fired the ball first time into the roof of the net.

61mins Megan Rapinoe breaks the deadlock in the World Cup final as a VAR intervention led to the penalty decision. #RTEsoccer

There were several incidents involving VAR controversy during the World Cup. Penalties were awarded and taken away by order of VAR, prompting many to vent frustrations about the technology and the rules regarding handball.

England suffered from a VAR call in their third place play-off. After England fell into a 2-1 deficit, Ellen White thought she had scored the crucial equaliser with a brilliant individual effort.

But VAR intervened to declare she had handled the ball, and the goal was ruled out with Sweden holding on for the win.

VAR also made an appearance in the final, after a challenge on Alex Morgan lead to a penalty which was dispatched by Rapinoe.

Another tasty goal gets the nod in our highlights list. Cameroon's Ajara Nchout sent her side through to the knockout stages after hitting a brace against New Zealand.

Her first arrived just before the hour-mark but it was her match-winning strike in the dying moments that was the noteworthy score.

With almost five minutes of injury time played, Nchout gathered the ball outside the New Zealand box and skipped her way around the defender before burying the shot.

It might not have been a flashy goal, but it was certainly a brilliant technical effort.

All the action from a dramatic six-goal thriller in Paris between #SCO and #ARG #FIFAWWC pic.twitter.com/hTmp3MpIK6

This was arguably the most dramatic result of the tournament. Scotland were 3-0 up with 20 minutes to go against Argentina, closing in on a victory that would send them through to the knockout stages.

But Argentina rallied with goals from Milagros Menendez, Florencia Bonsegundo, and a deflection off keeper Lee Alexander to clinch a draw and send Scotland crashing out of the tournament.

The Dutch keeper was superb throughout the tournament, and her efforts were rewarded by picking up the Golden Glove award.

Her superb shot-stopping skills kept the USA scoreless for much of the World Cup final, but their relentlessness got the better of her in the end.

But she was a shining light throughout the World Cup, and was included in the RTÉ panel's team of the tournament.