A juvenile exhibition at half-time in the Liam Miller tribute match at Pairc Ui Chaoimh in both hurling and football has been confirmed by the organising committee and Cork County Board.

The charity fundraiser game was confirmed at the GAA venue at the weekend, and a follow-up meeting took place today between members of the Liam Miller Tribute Organising Committee and the Chairperson and Secretary of the Cork County GAA Board to agree on further details of the event.

"The County Board have confirmed there will be no rental cost involved with the stadium, which is much appreciated by the organisers," the joint-statement read.

"It was also agreed that the most suitable way to celebrate and recognise Liam’s involvement in GAA sport at a juvenile level is to have juvenile exhibition games, in both football and hurling, at half-time involving young boys and girls from Liam’s club Éire Óg."

Ticket prices have been reduced due to the move to the bigger venue and will start out at €10.

The game was initially to be played at Turner's Cross in Miller's native Cork, a ground that has a capacity of around 7,000. The tickets quickly sold out, strengthening calls for a switch to the 45,000 capacity Páirc Uí Chaoimh in the city.

Speaking to RTÉ Sport, Chairman of the Liam Miller Tribute Organising Committee Michael O'FLynn said he was confident that the event on Tuesday 25 September will be a sell-out.

"I'd be very positive about the sales of tickets because the demand here from the public has been enormous. Of course it's a large stadium and it's [on] a Tuesday afternoon, but I'd be extremely positive that will get this filled out. That's my prediction."

The organising committee of the #LiamMiller tribute match have reduced ticket prices in view of the move from Turner’s Cross to Páirc Uí Chaoimh. Ticket prices now start at €10. The stadium is being donated free of charge by @OfficialCorkGAA. @rtenews pic.twitter.com/XfbghnTeMX

"I think the demand around the city and county has been phenomenal outside of Cork itself. Everyone you meet on the street, they all want to go to the game. I think the fact that it's in the Park [Pairc Ui Chaoimh], 45,000 [capacity] allows people from different areas to go there.

"All in all, it'll be a fantastic occasion and we should have a massive crowd."

GAA President John Horan said at the weekend that an offer from the organising committee to make a donation to a GAA charity was declined by the organization.

"They did make a generous offer to us that they would give a donation towards a GAA charity but we have actually declined that offer and we will look after the charity that was in mind here centrally in Croke Park," he said.

"We as an organisation feel responsible that we will look after our own members." 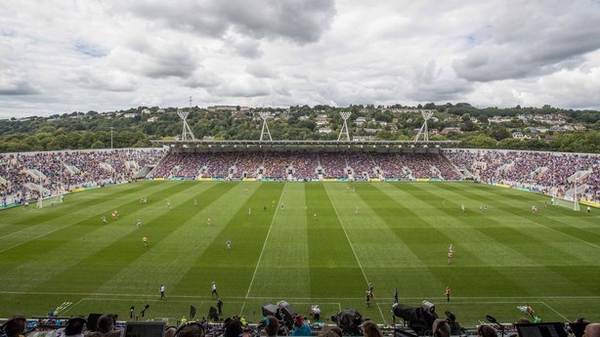