Holders Germany took a significant step towards qualifying for next summer's World Cup in Russia with a hard-fought 2-1 win in the Czech Republic.

Timo Werner latched on to Mesut Ozil's fine pass to give Group C leaders Germany a fourth-minute lead, but Vladimir Darida levelled for the hosts with a 25-yard effort 12 minutes from time.

Mats Hummels headed home an 88th-minute winner from Toni Kroos' free-kick to maintain Germany's 100 per cent record and five-point advantage over Northern Ireland, who remain second following a 3-0 away win over bottom side San Marino, but are now seven points clear of the Czech Republic, whom they face at Windsor Park on Monday night where a draw would secure runners-up spot. 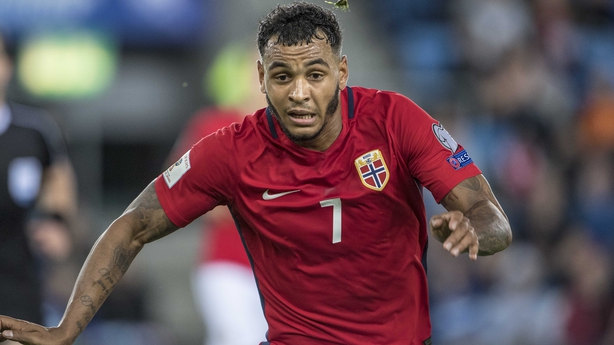 Elsewhere in Group C, Norway beat Azerbaijan 2-0 in Oslo with a first-half penalty from Bournemouth forward Josh King [above] and an own goal after 66 minutes from Rashad Sadygov.

Azerbaijan finished the match with 10 men after midfielder Javid Huseynov was sent off in the final minute for a second caution.

In Group F, Slovakia remain two points behind England - who laboured to victory against Malta - ahead of their clash at Wembley on Monday night after a late goal from Adam Nemec secured a 1-0 win over Slovenia in Trnava.

Scotland kept their World Cup qualification hopes alive with a convincing 3-0 win over Lithuania in Vilnius. 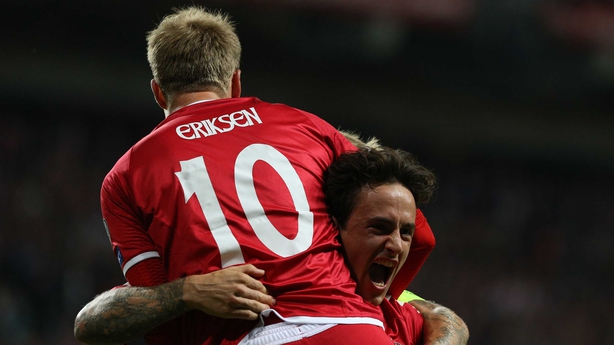 In Group E, Denmark inflicted a first qualifying defeat on Poland with a stunning 4-0 win in Copenhagen to move within three points of the leaders.

Thomas Delaney put the hosts ahead after 16 minutes, with Andreas Cornelius doubling the lead just before half-time.

Huddersfield defender Mathias Jorgensen came off the bench to make it 3-0 on the hour, with Tottenham midfielder Christian Eriksen wrapping things up late on.

Montenegro are also now on 13 points, above Denmark on goal difference and just three behind Poland, after their 3-0 win in Kazakhstan.

Marko Vesovic put the visitors ahead after 31 minutes, with Fatos Beciraj and Marko Simic on target in the second half.

Armenia had defender Taron Voskanyan sent off for handball when conceding a penalty early in the second half, but Bogdan Stancu saw his spot-kick saved by Grigor Meliksetyan - only for Maxim to have the final word with a close-range finish.