Northern Ireland are on the brink of securing second place in their World Cup qualifying group after beating San Marino 3-0 to record their fourth successive victory.

Never before in the nation's history have they won four on the spin, although they needed 70 minutes to eventually break down the microstate, at which point they scored three in eight minutes, two through Josh Magennis and one from a Steven Davis penalty.

Defeats for Azerbaijan and Czech Republic elsewhere ensured they increased their advantage in second place to seven points with three games to play, meaning a draw against the Czechs on Monday will seal that position - and a possible play-off berth for the finals in Russia.

With that prize inching ever closer, there was plenty of tension as they were largely frustrated for long periods against the country ranked 204th in the world - one that has never won a competitive game.

But once Magennis broke the deadlock with 20 minutes to go, a further two goals soon followed to maintain a winning run that dates back to the success over Norway in March, and includes June victories over Azerbaijan and New Zealand.

O'Neill had instructed his players to treat this contest as if they were facing world champions Germany, though it is unlikely forwards Kyle Lafferty, Conor Washington and Magennis will be deployed against them in Belfast in October.

The Windsor Park pitch will likely be in far better condition than the one in Serravalle too, with a cut-up surface causing more issues for the visitors despite their dominance of possession. 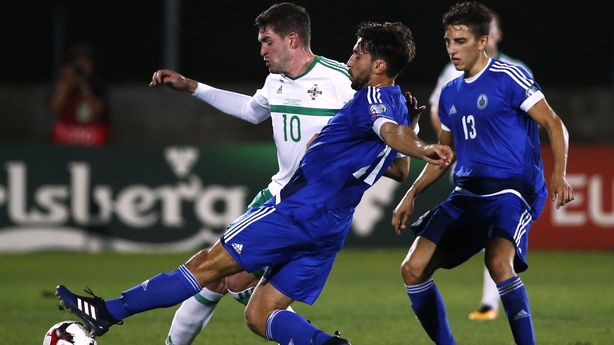 That aspect of the game is an unfamiliar one for this Northern Irish team, and it was set pieces, far more their bread and butter, where they looked most dangerous.

Skipper Davis volleyed wide from a Chris Brunt corner cleared out to him while Magennis and Norwood both directed headers off target from set-pieces.

Norwood looked like the one man in a white shirt who could unlock a back five that was supplemented by the other five outfield players and he fed Lafferty, who rounded goalkeeper Aldo Simoncini but was pushed too wide.

The Hearts forward's chip to the back post did not reach Washington and though the attack was kept alive by Norwood again, two San Marino defenders diverted Davis' effort over the top.

At that point the visitors were still yet to test Simoncini, who impressed in Belfast and showed he was there when needed with smart saves from Magennis and Washington.

It was still goalless at half-time after Washington missed a glorious opening and Magennis' header came back off a post, and O'Neill was growing increasingly tetchy as San Marino held firm.

Games against minnows used to be this team's Achilles heel - and it looked like it may have been one of those nights when Simoncini brilliantly denied Magennis on the line - but the ball was kept alive by Davis and he coolly squared for Magennis to ease the tension with the 70th-minute opener.

He was on hand to add a second when nodding in from Washington's squared ball across and the travelling Green and White Army thought a player that had only scored one international goal before was on course for a hat-trick when Alex Gasperoni handled in the area.

Normal spot-kick taker Davis assumed responsibilities, though, and wrapped up the points.

A late Germany winner against the Czechs made it even sweeter and the Northern Irish head back to Belfast this weekend knowing second spot can now be sealed as early as Monday.