Harry Kane began September by bringing his mini scoring drought to a timely end, but the way Gareth Southgate's England toiled to victory in Malta underlines just how much work needs to be done ahead of the World Cup.

It surely remains a case of when, rather than if, the Three Lions secure their place in Russia next summer, but the underwhelming nature of their display at the Ta' Qali National Stadium raises concerns.

Malta are ranked joint 190th in the world behind American Samoa, the Cook Islands, Brunei and Bangladesh, yet it took Kane's second-half strike and a late flurry of goals from Ryan Bertrand, Danny Welbeck and the Tottenham striker to eventually secure a flattering 4-0 win.

England's 3,700 travelling fans resorted to gallows humour during a dire first half, chanting "we're f***** s***" and then booing their players at the end of a period devoid of inspiration, drive and intent.

Andre Schembri gave England a scare shortly after the break, only for Kane - who had endured another barren August - to quickly retaliate by slotting home after patient play by Dele Alli.

The scoreline could not divert attention from a poor overall display, though, and improvements will be needed at home to Group F's second-placed side Slovakia on Monday, never mind the World Cup.

On a warm night, the England boss stuck with his pledge to name a strong line-up, even if some will argue with his assertion that Joe Hart is the country's best goalkeeper at the moment.

The odd nervy moment when racing off his line in the opening period did little to win over the doubters, but those in front of him were in for the most flak after a promising England start petered out.

Andrew Hogg was key to restricting England to a 2-0 win in Southgate's first match at the helm and was impressing again, producing a fine stop to deny a close-range Kane header after Raheem Sterling was crowded out.

The hosts, as Southgate predicted, were disciplined and defended in numbers, swatting away set-pieces and cutting out England's attempts to break through the line. 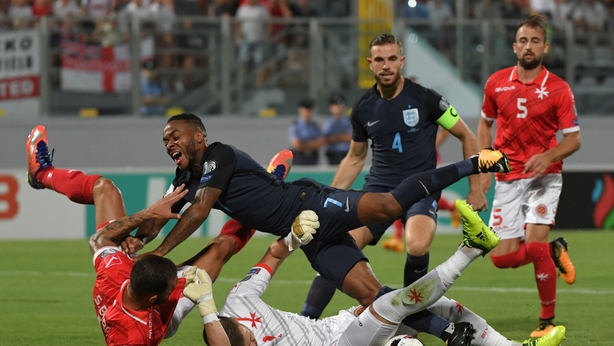 It took until stoppage time for the next meaningful attempt, with Liverpool new boy Alex Oxlade-Chamberlain turning and forcing a save out of Hogg.

That did little to improve the mood of the travelling hordes a smattering of boos welcomed the half-time whistle.

Elton John's 'Candle in the Wind' echoed around a largely bemused ground, where the unthinkable nearly happened six minutes after the restart.

Jean Paul Farrugia somehow kept the ball in on the left and neat team interplay led captain Schembri to take aim, fizzing a low shot narrowly across the face of goal.

It was an effort that belatedly jolted England into life.

Alli's dilly-dallying looked to have cost his side a chance within the Maltese 18-yard box, but he remained calm and played through Kane to hit home a low shot.

Sam Magri, who played alongside Sterling and Nathaniel Chalobah in England's youth teams, fired another warning shot across the Three Lions' bows before Kane had an effort from distance as the game slowed again, although there was pitch invader to entertain the masses.

The visitors' attacking play was breaking down late on, so Bertrand took matters into his own hands from distance. The Southampton left-back took aim from 30 yards, with his hopeful effort beating the otherwise impressive Hogg.

A third arrived as the clock struck 90 minutes and Malta's defence gave up. Having failed to bundle home moments earlier, Welbeck was able to direct a smart cross from Kane into the net.

The Tottenham striker continued to lead by example, finishing well from close range at the death to complete a flattering first away win as England manager for Southgate.