James McClean was left seething with the match referee David Fernandez Borbalan after the decision to disallow Shane Duffy's goal during the Republic of Ireland's 1-1 draw with Austria at the Aviva Stadium.

Jon Walters’ equaliser five minutes from time cancelled out Martin Hinteregger first-half opener for the visitors, but it was Martin O’Neill’s side that appeared most likely to snatch a winner after an ineffective opening 45 minutes.

Kevin Long had his goal ward effort cleared off the line, and minutes after Walters’ cool strike, Duffy was convinced he had put his name on the scoresheet.

The Spanish official however deemed that the central defender led with the arm as he contested the aerial rebound and the goal was ruled out.

Ireland were forced to settle for a draw that leaves them on 12 points in Group D, four clear of the Austrians, but McClean cut a frustrated figure post-match.

"I know in this day and age you get fined [for criticising referees], but you watched the game, you tell me," he told RTÉ Sport’s Tony O’Donoghue.

"They [Austria] had a 12th man today. That’s all I’ll say on that. I’m really disappointed because we should have come away from that game with three points, but we didn’t."

The West Brom player admitted Ireland were sluggish in the opening period, but was pleased with how they performed after the interval, paying special credit to goalscorer Walters.

James McClean on the performance of the referee: "You tell me. They had a 12th man today." pic.twitter.com/f0rpxyqkja

"It was disappointing to go in at half-time 1-0 down, but we rallied around and had a go in the second half and that shows the character we have got here," he said.

"On another day we’d take them chances. Jonny rescued us with a great finish. I thought he was amazing.

"I’m really disappointed we didn’t get three points because I really think we deserved it." 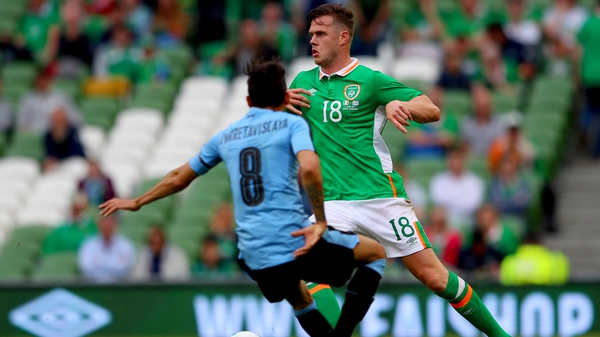