Ireland manager Martin O’Neill has made a surprise inclusion by naming Kevin Long in his side for today’s World Cup qualifier against Austria at the Aviva Stadium, kick-off 5pm.

The Burnley defender has impressed the manager in the recent friendly fixtures and lines up beside Shane Duffy in the centre of defence.

There had been speculation throughout the week that the West Ham stopper, who has been Ireland’s first choice for the past 20 months, would be replaced by the in-form Keiren Westwood.

But O’Neill has overlooked Randolph’s mistake in last week’s game against Uruguay, which led to the visitors’ goal, and has named the former Birmingham City keeper in today’ starting XI.

And there was no place for Wes Hoolahan in O’Neill first-choice eleven for the vital qualifier as the manager has named a more defence-minded midfield. Glenn Whelan starts alongside Harry Arter and Jeff Hendrick in midfield with Robbie Brady and James McClean on the right and left flanks respectively.

Whelan captains the side in Seamus Coleman’s absence, while Jonathan Walters leads the line for Ireland today.

In defence, as mentioned Duffy starts alongside Long in the centre-half positions, while Stephen Ward will play at left back and Cyrus Christie on the right side of the back four. 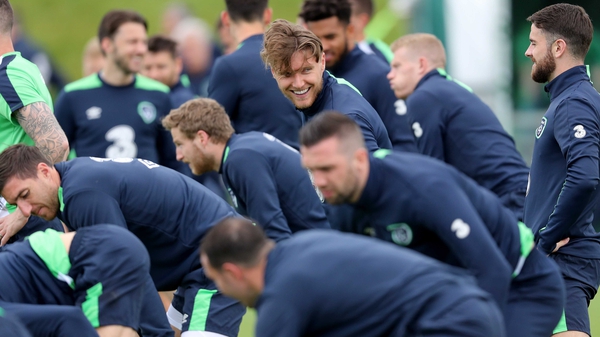 Preview: Ireland go to war with favourites' tag draped on their shoulders