Luis Suarez scored on his Uruguay return as Brazil threw away a two-goal lead to draw 2-2 in their World Cup qualifier and increase the pressure on coach Dunga.

Douglas Costa opened the scoring inside a minute and when Renato Augusto made it 2-0, all looked rosy for the Selecao.

But Edinson Cavani pulled one back before half-time and Luis Suarez, playing for his country for the first time since being suspended for biting Italy's Giorgio Chiellini at the 2014 World Cup, struck early in the second half to earn a point for Uruguay.

Suarez and his Barcelona team-mate Neymar had had a friendly bet on the result - loser buys the hamburgers - but both will have to pay their own way after the spoils were shared.

Brazil climb to the third qualifying berth in the 10-team group - two points behind their opponents, level with Paraguay and Argentina - who occupy the intercontinental play-off spot - and just two ahead of Chile and seventh-placed Colombia. 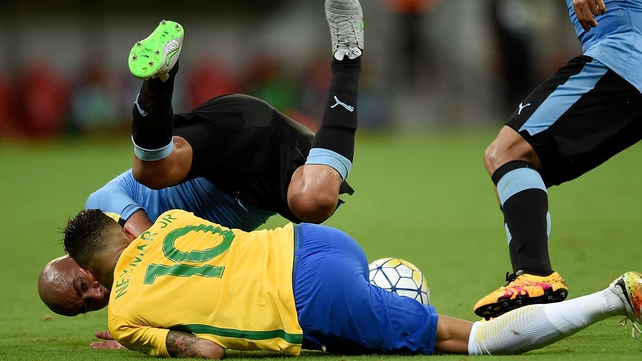 Goalkeeper Alisson, in whom Dunga has put his faith during this qualifying campaign, was at fault for Suarez's equaliser and David Luiz, selected ahead of Thiago Silva in central defence, gave an error-strewn performance.

Dunga had also been questioned before the game over the omission of Real Madrid full-back Marcelo.

Straight from the opening kick-off, though, the hosts were on the front foot and Willian crossed for Douglas Costa to finish from close range.

Neymar twice went close to a second, which eventually came in the 26th minute when Luiz Gustavo's through-ball was not cut out by Alvaro Pereira and Renato Augusto dummied past goalkeeper Fernando Muslera and slotted home.

Uruguay cut the deficit five minutes later, though, when Pereira nutmegged Willian and crossed to the far post, where Carlos Sanchez nodded down for Cavani to finish.

Suarez and Neymar both missed the target and Brazil went close twice more through Douglas Costa and Fernandinho, while Carlos Sanchez and Cavani had efforts saved for La Celeste before half-time.

Just three minutes after the interval, though, the visitors were level. Suarez's low drive from the left side of the penalty area was powerful but should have been comfortably dealt with by Alisson, who allowed it to squeeze under his body and find the net.

The second half was a largely quiet affair after that, until a late flurry of action which began when Suarez's effort was blocked and team-mate Matias Vecino fired just wide.

Philippe Coutinho had an effort saved and Neymar put a free-kick over the bar but Uruguay were on top in the closing minutes, with Suarez, Alvaro Gonzalez and Cristhian Stuani all denied as Alisson partially redeemed himself. 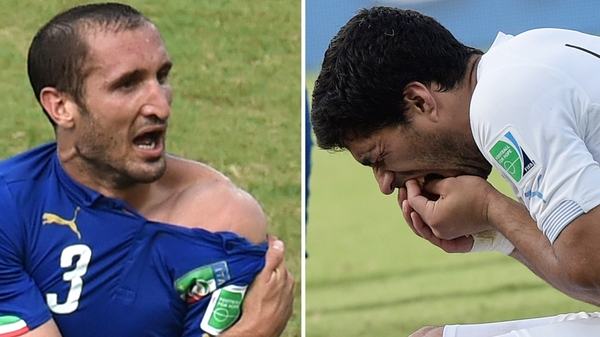