Andy Farrell has been trying to reinforce a sense of 'Irishness' in the camp ahead of the team's trip to Twickenham on Sunday and has even enlisted the help of Bono.

The U2 frontman was a guest at the squad's hotel in Kildare yesterday evening and entertained the panel with a song from the best-selling band's repertoire, although which ditty he belted out remains an in-house secret.

The puns write themselves.

After a stellar 2018, when Ireland completed the Grand Slam under Joe Schmidt with a high-class win away to England, standards dropped in 2019 and Farrell, according to winger Jacob Stockdale has been trying to reinvigorate the team.

Asked about the meeting with the singer, Stockdale said: "Faz wants to give us a bit of an identity and he's doing that through our training but also through things like speaking to Bono.

"Last night he talked about Irishness and what it means to be Irish and what is special about it. 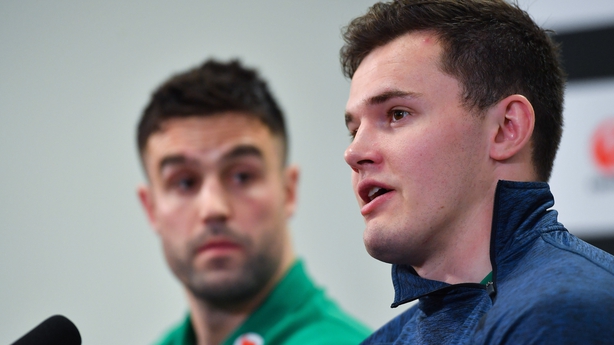 While Stockdale, who turns 24 in April, might have missed out on the band's heyday, the Ulster player joked that Conor Murray, 30, probably has more experience of chart-toppers.

But the scrum-half, named in an unchanged starting XV from the side that beat Wales, revealed he was inspired more by Bono's words than his lyrics.

"It was just cool to hear him talk about his life experiences and how he views the world," said the Munster number 9.

"You realise what he has done outside of music, in terms of charity and the people he has dealt with, politically, just a huge personality and it was unbelievable to hear him speak, unbelievably intelligent and well articulated guy. It was a really cool evening."

At your service, Sir… and always at the service of a truly great Irish team…! Bono @JohnnySexton @IrishRugby pic.twitter.com/lhv2T4oKQg

Farrell, whose son Owen will line up for England, added: "First of all, we were blown away really that he gave his time up to come over and see us.

"We invited him in, he was top of the wish list, which was unbelievable really.

"He is quite a private person really but he put a lot of time and effort into being able to answer the questions from the floor in a great manner that we got something out of it.

"He is obviously a proud Irish man, so he talked a bit about Irishness."

The Dubliner wasn't the only guest of the squad this week with former captain Paul O'Connell dropping in to chat to the team ahead of the daunting trip to London, where Ireland have won just once since 2010.

"He's been here all week," said Farrell of the ex-Munster lock.

"He’s here until Friday. We like it when people come into camp.

"We try and invite as many people as we possibly can. It’s not just Paul that’s been in camp this week, there’s a few other guys.

"We were blown away really"

"We like people to try and take stock from the outside and get a feel, the feeling of how camp is.

"Paul is here to observe and come into all the meetings, share his experience along the way and try and connect with the boys.

"He’s been there and done that. He’s been to Twickenham a few times and he’s played some big games, so he knows what the boys are going through.

"So yeah, you see a lot more of the boys gravitating towards him during the week, and that’s great to see."