Ireland head coach Andy Farrell has named an unchanged team for Sunday's Guinness Six Nations match against England at Twickenham, where the visitors can clinch the Triple Crown.

There is one change on the bench with Caelan Doris, who made his debut against Scotland in the opening round of the campaign, named instead of his Leinster team-mate Max Deegan, who featured in the 24-14 win over Wales.

Deegan's omission is the only change to Farrell's 23-man squad.

Asked if it was a straightforward selection, he said: "Yeah. We had a decent performance in our last outing.

"It was nowhere near perfect, of course. But we've had a few days to make sure how we get better.

"Obviously we had a fallow week, and we took the lads down to Cork for a good couple of days. We tried to put a few things right, and hopefully we can get an improved performance off the back of that."

Farrell has resisted temptation to start Doris, who was forced off with a head knock in the opening minutes of the 19-12 win over Gregor Townsend's charges, sticking with the in-form CJ Stander in the centre of the back row. Peter O'Mahony will continue at blindside flanker.

Robbie Henshaw has overcome a head injury suffered in the 24-14 win over the Welsh to renew his centre partnership with Bundee Aki, while captain Johnny Sexton continues at fly-half alongside scrum-half Conor Murray.

Experienced wing Keith Earls again has to be content with a place on the bench as Ireland's back three now has a settled look to it, with Andrew Conway and Jacob Stockdale playing either side of full-back Jordan Larmour. 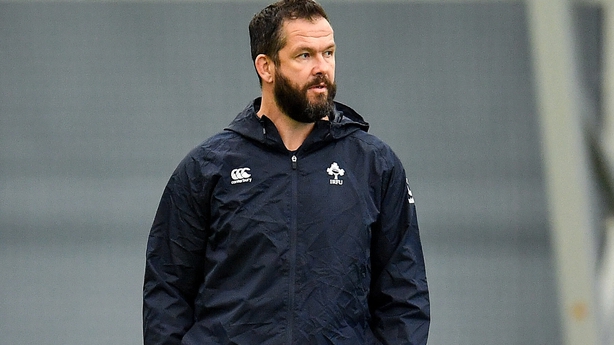 Rob Herring once again gets the nod over Ronan Kelleher at hooker, with Cian Healy and Tadhg Furlong completing the front row, backed up by locks Iain Henderson and James Ryan.

Openside flanker Josh Van Der Flier, scorer of one of Ireland's four tries against Wales, joins Stander and O'Mahony in the back row.

Tom O'Toole and Will Addison will return to Ulster, who play Cheetahs this weekend in the Guinness Pro14, while the rest of the non-matchday 23 will stay in camp ahead of their final training session on Friday.

England, who will name their team on Friday, have lost to France and beaten Scotland, both games coming away from home.

On his native country's form to date, Farrell said: "It's quite difficult. I wouldn’t say I need to take in the 'so far’ part, because obviously the start France had in the first game, they were trying to ride that because England have been notoriously very good, starting pretty well.

"The conditions came down in Paris which made it very hard for them, but they showed great spirit to come back and fight to nearly win the game.

"Then the conditions in Scotland were horrendous, so we don’t get too much from that, other than that they’ve got great fighting spirit like we’ve said.

"We look back on the last few years on how they play, we know they’re an outstanding side, and we expect them to be at their best at the weekend."

Follow England v Ireland (kick-off 3pm) on Sunday via our live blog on RTE.ie/Sport and the News Now app or listen live on RTÉ 2fm. Highlights on Against the Head, Monday at 8pm on RTÉ2 and RTÉ Player.