Ireland have enjoyed their best season on the Sevens circuit but Stacey Flood believes the best is yet to come.

Having finished fourth in the HSBC World Rugby Sevens Series and claimed podium finishes in Spain and Canada, Ireland head to Cape Town on a high and as challengers for the Rugby World Cup Sevens.

They face Brazil in their opening match on Friday (12.54pm Irish time).

"It's been really exciting, a great season for us," Flood told RTÉ Sport. "But we want to keep building and not just have those once-off or twice-off performances.

"Throughout the year we have been building and getting better and I think people are starting to see that, and that's even more promising, so hopefully we can do ourselves justice this weekend."

The World Cup brings back happy memories for Flood, one of five members of current squad that finished sixth four years ago in San Francisco, where they defeated England 19-14 in their opening match.

"That was one of my favourite games of all time, us beating England," she said. "It was knockout as well, so knocking them out of a World Cup, I think it was a little bit sweeter that it was England.

"My other favourite game is from this year, in Seville, getting to a final. Obviously we didn't win but that was my favourite tournament, and it had been the World Cup before that, so hopefully this World Cup has something special to bring as well for us."

Ireland have been handed a difficult draw, with New Zealand their likely opponents in the quarter-finals and France or Fiji in the semis.

But belief is high following those performances in Seville, where they beat Brazil in the pool stages - Flood scoring the opening try in a 29-12 win - and ousted Canada and England in the knockout stages before being edged out by Australia in the final.

Unlike the World Series, the World Cup is straight knockout, but Flood enjoys the format.

"The structure is crazy, but at the same time I think it suits Sevens," she said. "Because in Sevens anything can happen. You can win or lose in the blink of an eye so I think that all-or-nothing kind of stakes suits the game.

"Yeah, it's tough, but four games to win a World Cup, I don't think you hear that in many other sports."

Ireland's most recent meeting with Brazil came in the final event of the World Series in Toulouse and it was a much closer affair. Twice the South Americans led before a late brace from Amee-Leigh Murphy Crowe snatched a 17-14 success.

"It wasn't our finest game, but we got there in the end," said Flood. "They're a tough opponent, quite speedy. Hopefully we've created the right game plan to beat them and get the win."

Tries are virtually guaranteed with Murphy Crowe in your line-up, which gives Ireland a fighting chance against any opponent. The Tipperary flier finished as top-scorer in the World Series for the second time with 36 tries in 34 appearances.

"Amee-Leigh on and off the field is an amazing person and an amazing player," said Flood. "Her work rate and effort in everything she does, she's so diligent and resilient.

"It's such an honour to play with her and to be able to play with someone who time and time again can do what she does.

"We're so lucky to have her and she's just a great team-mate to have. Thank God, I wouldn't like to play against her."

Having both represented Ireland in XVs, Flood and Murphy Crowe were interested onlookers as Greg McWilliams' side drew their historic series in Japan.

With the IRFU offering 43 professional contracts to 15s and Sevens players, Women’s rugby in Ireland is in much better shape compared to 12 months ago and weekends like this are huge in continuing to grow the game.

"We want to be role models for people," said Flood. "We want to see Amee-Leigh Murphy Crowe, Lucy Mulhall, Beibhinn Parsons, Erin King named in the media, because they deserve and should be named in the media. You watch those girls play and you recognise that, and anyone that does watch can see it.

"It's about getting other people to watch and making sure the younger generation knows that it's a viable option for them if they want to go full-time and play rugby and do it as a career. It is plausible for them. The more that's out there, the better." 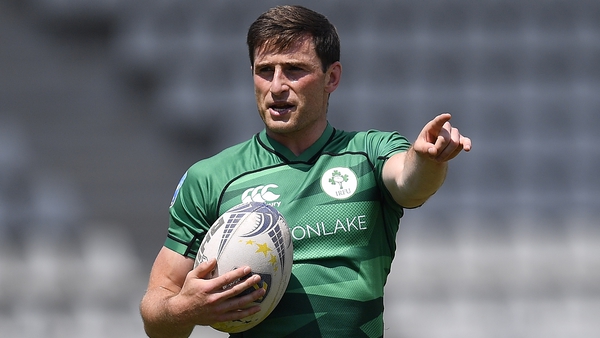