The IRFU has confirmed it will offer 43 professional contracts to Ireland women's 15s and 7s players next season.

It's the first time members of the 15s squad will be offered paid contracts.

The IRFU said they wish to discuss the details of the contracts with the players before announcing any more details publicly but revealed the deals will be worth up to €30,000 plus match fees and bonuses.

Gillian McDarby has been appointed in the newly created role of Head of Women's Performance and Pathways.

The IRFU said she will be responsible for "the development, delivery, and implementation of the approved strategic and operational direction of the women's rugby performance programme for both XVs and Sevens".

McDarby was on Cycling Ireland's Board of Directors from 2017 to 2021 and has worked as the IRFU's High Performance Centre facilities and operations manager for the last two years.

"I've worked across several important areas in the game and believe there is a huge growth opportunity for the women's game in Ireland," she said.

"I'm looking forward to working with all stakeholders to bring the women’s game to the next level. It's also pleasing that my appointment coincides with the formal announcement of contracts for up to 43 female players. This is a major step forward for women’s rugby in Ireland.

"Success in the women’s game will be based on sustainability: creating sustainable pathways within the competition structures, getting meaningful competition structures in place for both women and girls to access the game of rugby at the right entry points and continuing to develop competitive international teams in fifteens and sevens. That, to me, is success."

Back in March the IRFU released the findings of its report into the failure of the women's team to qualify for the World Cup, with 30 recommendations and a promise of an additional €1m for the women's game.

The role of Director of Women's Rugby, from which Anthony Eddy resigned, was scrapped with the new role of Head of Women's Performance and Pathways created instead.

Speaking to RTÉ Sport, former international Hannah Tyrrell outlined her optimism about the direction the women's game is going in the wake of the latest developments.

"This will take time. It won't happen overnight but hopefully by 2025 and beyond we start to see progress, real improvements and real depth within our squad and hopefully we can start to lay down some markers as a top international side," she said.

"They've taken those (30) recommendations on board, made a couple of changes and put some steps in place in order to try and improve things and so far so good from what we've seen.

"But we'll have to wait a little bit longer to see have they actually worked on things that need to be improved upon. This is a great first step but it will remain to be seen whether the objectives are actually reached and have we done enough." 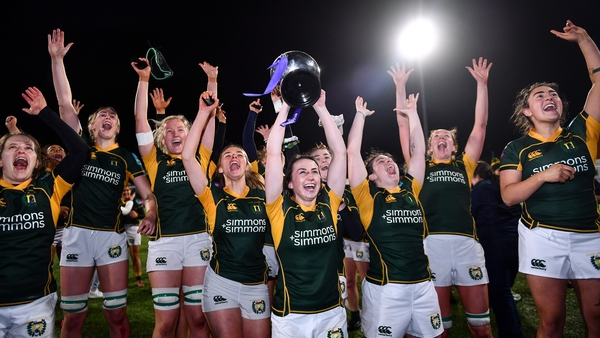