It's unusual for an Irish side in Europe to have so much access to the thoughts of a rival coach but Leo Cullen smiles at the suggestion that Ronan O’Gara might be speaking out of school.

Leinster face La Rochelle on Saturday week in the Heineken Champions Cup final and O’Gara has been doing his regular rounds on Irish media, writing a column and appearing on a radio show talking about the match.

The former Ireland out-half says that next weekend’s match in Marseille is no more important than their regular-season Top 14 match against Stade tomorrow, and was coy about the possibility of giant forward Will Skelton, who has a calf injury, being fit for the European final.

"I would definitely be wary of anything that’s there, for sure," said the former Ireland lock with a chuckle at his ex-international team-mate's comments.

"Is that the polite way of saying it? I’d be very wary of anything that the coach of La Rochelle says in the media because I’m sure he knows exactly what’s going on in his own world versus what he wants to put out there in the world. 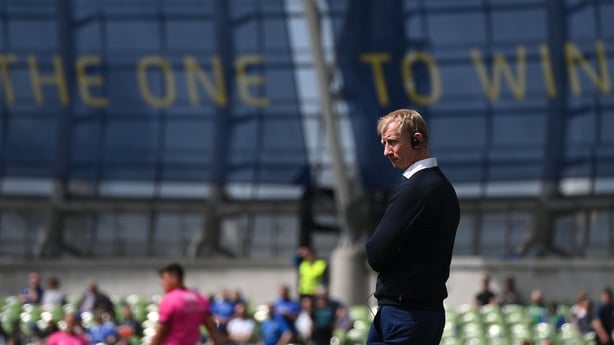 "So we take certain things with a pinch of salt.

"At this stage you’ve got to focus on yourself. It’s very easy to get distracted by the outcome. For us we’ve got to go through our own rituals.

"Getting our own stuff right so we can impose our game on the opposition, whoever we play, whether it’s Munster this week or La Rochelle next week. Everyone has got to come up with a plan about how to stop a team."

Before that, Leinster host Munster in what the the coach described as not "must-win but a must-play-well" match tomorrow at the Aviva Stadium (7.15pm).

Already assured of top URC seeding, Cullen has rested most of his regulars but insisted that players can play themselves into contention for the squad for La Rochelle.

"Everyone has to be ready for anything," said the 44-year-old, who is able to welcome back Jordan Larmour and Ryan Baird to this starting XV.

"Anything can happen. It was an unbelievably unfortunate injury for Tommy O’Brien [in training before Toulouse], that’s an example, he was running and in the team when that happened.

"This is the time of year when a player steps up and does incredibly well it’s very hard to ignore that.

"Our lads have to focus on themselves and deliver a big performance for the team. That’s when the team will be at its best.

"It’s an opportunity for our guys and some guys are very close. Some guys have been in the match-day squad for Toulouse.

"Other guys get a chance to showcase what they can do.

"Some have been itching for an opportunity for the last couple of weeks.

"Ryan has been available and it’s been tight with some of those selections over the last couple of weeks but he just needs to get a game under his belt.

"He played 40 minutes last week against the Universities team which was important for him and he’s got to try to push on now.

"Jordan as well, he was unlucky, he got very close to getting back playing and then had a little minor setback. He’s back now and hopefully he cracks on and is able to finish the season out well."