It's the final round of the United Rugby Championship regular season with three of the four Irish provinces already guaranteed to progress.

Leinster, Munster and Ulster will all go into the play-offs, while Connacht's season will end on Saturday afternoon.

It's all about seedings now with everyone except Leinster, who are safe in the top spot, playing for places and home advantage in the knock-out phases.

RTÉ Radio 1 will have live commentary on Leinster v Munster.

Belfast is forecast to see light rain showers in about 13C, while Galway on Saturday afternoon will be overcast, with temperatures around 14C. Dublin, later on Saturday evening, expects cloudy conditions in 15C.

Ulster sit fifth in the table and take on third-placed Sharks, who are one point further ahead.

A win will guarantee a home quarter-final, while the number two ranking for a home semi-final is possible and would most likely require a victory for Ulster and losses for Munster and Stormers who lead in many of the tie-breakers.

Dan McFarland's men suffered back to back home losses in defeats to Toulouse and Munster, while they bounced back somewhat with a hard-fought 16-10 victory in Edinburgh the last time out.

The Sharks, who boast Lukhanyo Am, Makazole Mapimpi, Bongi Mbonambi, Thomas du Toit and Siya Kolisi among their number, have won their last three games, including matches with Leinster and Connacht.

It's a first ever meeting of the teams, while Ulster have won all five previous home games against South African opposition.

Connacht, with eight wins and nine defeats to date, have long been out of the play-off reckoning.

They are already looking to next season and will say goodbye to a number of players after this game, while Andy Friend hopes to add seven new men to his panel for the 2022/23 season.

Currently in 12th spot they can get to 11th with a win over the bottom side, Zebre.

They need to win and hope the Lions slip up away to the Dragons.

The Italians, meanwhile, have lost their last two matches, to Benetton and Cardiff and sit rock bottom after winning just once this season.

Paul Boyle, Caolin Blade, Bundee Aki and Mack Hansen have been ruled out for the hosts through injury.

Dylan Tierney-Martin is handed his first Connacht start at hooker, while there are also starts for Seán Masterson at openside flanker and Oran McNulty at full-back.

Centurions Denis Buckley and Finlay Bealham partner Tierney-Martin in the front row, while locks Gavin Thornbury and Niall Murray are paired together.

Masterson is accompanied in the back row by his brother Eoghan and Cian Prendergast at number 8.

Kieran Marmion and captain Jack Carty continue at 9 and 10 respectively, as do centres Tom Daly and Tom Farrell.

The side is completed by wingers Alex Wootton and John Porch.

Included on the bench are departing players Ultan Dillane, Abraham Papali'i and Sammy Arnold who will make their final appearances for the club if called upon.

Leinster are already assured of top spot and the top seeding for the play-offs. The little matter of a Heineken Champions Cup final against La Rochelle in Marseille next Saturday means that they will use fringe players to take on Munster at the Aviva Stadium.

A win of any description will consolidate Munster's second place in the standings.

The 2011 champions are level with Cell C Sharks, DHL Stormers and Ulster with 11 games won so a try-bonus point victory could be key to earning number two ranking and securing a home semi-final (should they qualify).

Defeat, depending on how the Bulls do against Ospreys, could see Munster drop to sixth.

Munster have played not since the Champions Cup loss to Toulouse two weeks ago but prior to that beat Exeter, Cardiff and Ulster.

Larmour slots in at full-back with Rob Russell on his right and Rory O'Loughlin on his left.

The now-familiar pairing of Ciarán Frawley and Jamie Osborne are together in midfield again while there’s a first home start for Cormac Foley at scrum-half where he has Harry Byrne outside him.

In the pack, Ed Byrne will captain the side and is joined in the front row by Seán Cronin and Thomas Clarkson.

Joe McCarthy and Josh Murphy are the locks with the returning Baird, Scott Penny and Max Deegan completing the starting XV. 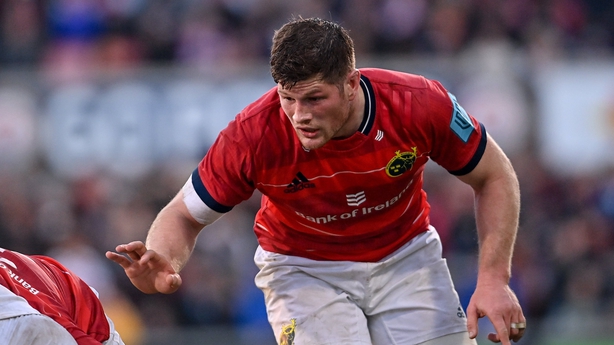 Meanwhile, Jack O'Donoghue will captain Munster, who make four changes to the side that faced Toulouse.

Thomas Ahern, Andrew Conway, Dan Goggin and John Ryan all come into the side and a positional switch sees Fineen Wycherley move to the back row.

Mike Haley starts at full-back, Conway returns from a knee injury for his first Munster appearance since January on the right wing and Keith Earls moves to the left wing.

Goggin and Chris Farrell start together in midfield with the half-back partnership of Conor Murray and Joey Carbery unchanged.

Josh Wycherley, Niall Scannell and Ryan pack down in the front row with Jean Kleyn and Ahern in the engine room.

Fineen Wycherley, Alex Kendellen and O’Donoghue complete the side, while Stephen Archer is unavailable due to illness.