Bernard Jackman believes Munster are good enough to win silverware in the United Rugby Championship if they can bounce back from the pain of a "cruel" Heineken Champions Cup exit at the hands of Toulouse.

After a pulsating 100 minutes in the European quarter-final between Johann van Graan's side and the reigning Champions Cup victors at the Aviva Stadium where neither side could be separated, the match was decided by the rarity of a place-kicking shootout.

Ultimately it was the French side who prevailed while Munster have been left to lick their wounds after coming so close to reaching the semi-final.

"I think it's very cruel on Munster who contributed a huge amount to what was a fantastic game in terms of drama," said Jackman on RTÉ's Morning Ireland.

"Unfortunately with the way the season has got compacted, (the game) needed to finish on the day with the semi-final coming up this weekend.

"But (the place kicking competition defeat) was absolutely cruel and so rare. The last one I remember was Leicester-Cardiff, it must be 10-12 years ago, so it doesn't happen very often."

And Jackman backed Munster to contend for other honours if they can bottle the ingredients which have carried them through recent weeks.

"Unfortunately for Munster, they miss out. But they've made massive progress the last couple of months and I think there's a reconnection," he said.

"The Munster fans were brilliant, they can be incredibly proud of their team and now the challenge for Munster is they've a week off to get back up now to the level they were at on Saturday and the previous couple of weeks against Ulster and Exeter and go and try to win silverware in the URC because this is the end of the Van Graan era; there's a lot of players who've been around Munster for a long time and I think their legacy will be built on winning silverware.

"And they're certainly good enough to win silverware and they were very, very close to being in a Champions Cup semi-final."

While Munster bow out, it's Leinster who will take on the challenge of trying to beat the Toulouse team that has edged past two Irish provinces en route to the last-four.

Jackman backed Leo Cullen's side to rise to the challenge, having got to the semi-finals after overcoming Leicester Tigers at Welford Road.

"On form, Toulouse beat Ulster by a point over two games, they beat Munster on penalties, (and) you'd have to say Leinster are a 10-12 point better team than Munster or Ulster," he said.

"So you'd expect Leinster to be able to go there. I think also the fatigue factor. That (Munster) game will take a huge amount out of Toulouse. They've got to go home and come back to Dublin.

"Leinster had that chance to freshen up their squad, leaving players at home when the youngsters went to South Africa and they looked really clinical going away from home.

"I think Leinster are a better side than Toulouse, particularly with the game being in Dublin it is a big advantage for Leinster."

Meanwhile, Ronan O'Gara is looking to take La Rochelle back to a second final in a row and Jackman tipped the former Munster and Ireland out-half's team to do their head coach proud by defeating Racing 92 in the other semi-final, which will take place in Lens rather than Paris.

"I think that's an advantage for La Rochelle," he said of the venue switch.

"I think La Rochelle have the firepower to beat Racing and Ronan could be into a back-to-back Champions Cup final where he might face Leo Cullen and Leinster."

Listen to Leinster v Toulouse in the Champions Cup semi-final live on RTÉ Radio 1 on Saturday from 3pm with live blog on RTÉ.ie/Sport and the RTÉ News app 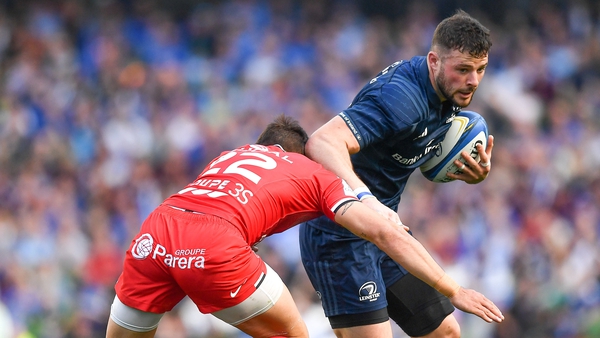