The race to end the regular season at the top of the overall table is firmly in Leinster's hands.

Leo Cullen’s men sit nine points clear of the DHL Stormers and could cement the top seeding for the play-offs this weekend, having missed an opportunity to do so when they lost to the Cell C Sharks last week.

Leinster visit the Stormers on Saturday and will be assured of top spot if they emerge from the weekend with a margin greater than five points over whichever team sits second.

A win would guarantee that, but a draw or two bonus points in defeat would also be enough, while one point would be sufficient should the Stormers win but fail to collect a bonus point themselves.

Munster, the Cell C Sharks and Ulster are a point back from the Stormers and still mathematically in with a chance of topping the table heading into the final two fixtures, although they would each need a pair of bonus-point wins and for Leinster to register no more points to be in with a shot.

After defeat in South Africa to the Sharks last week, @LeinsterRugby take on the in-form team in the @URCOfficial - @THESTORMERS .

Cork will see cloudy conditions with temperatures about 13C this evening.

Mostly cloudy, 23C with a thunderstorm in parts of the Durban area for Connacht's match on Saturday, while Leinster are due to play in sunshine and some clouds in about 20C in Cape Town.

In Edinburgh it will be mostly cloudy with a couple of showers in 8C. 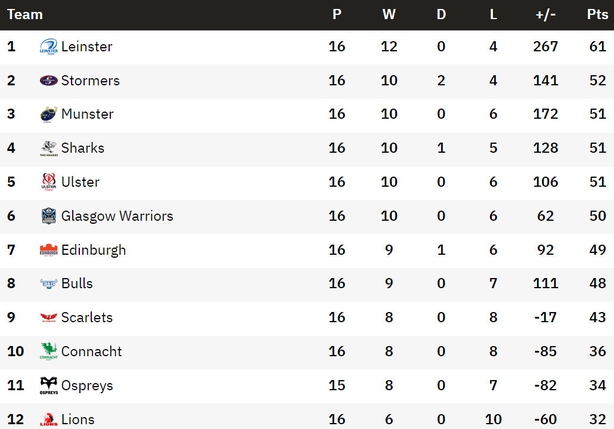 It's tight at the top of the table and Munster are one of three teams on 51 points with two regular season games remaining, including a visit to the Aviva to face Leinster in three weeks’ time.

Johann van Graan’s side have lost just once to a Welsh opponent in their last 15 such encounters in the United Rugby Championship: 10-18 to Ospreys in Swansea in October 2021; whilst their most recent defeat at home to a Welsh region was when Scarlets visited Limerick in February 2017.

Cardiff have slipped to three defeats in the URC since beating Glasgow at the Arms Park in March and have not lost four in a row in the Championship since November 2019, while they are yet to win away from home in the competition this season.

Munster beat Ulster away last weekend, while Cardiff lost at home to Ospreys.

Flanker Peter O'Mahony and wing Simon Zebo return to the Munster side.

Despite a hard-fought 33-30 win over the Lions last weekend, Connacht's play-off hopes are over and they will look to next season when they are due to welcome seven new players to their ranks.

Andy Friend’s side have won their last two URC matches, both away from home, at Benetton and at the Lions but have not won three in succession in the tournament since February 2021.

Connacht have lost just one of their last four away games in the Championship, an 8-56 reversal at Edinburgh on 4 March.

This will be the first ever meetings of the teams.

There are six changes to the Connacht side with Finlay Bealham, Gavin Thornbury, Leva Fifita, Conor Oliver, Conor Fitzgerald and Tom Farrell all brought into the starting XV.

Bealham forms an experienced front row with Denis Buckley and Dave Heffernan, while Jarrad Butler captains the side from number 8 with Cian Prendergast at blindside flanker.

It's an historic game for Monivea scrum-half Caolin Blade who reaches 150 appearances for the club, while Tom Daly partners Farrell at centre.

The back three is unchanged so Mack Hansen again starts at full-back with wingers Alex Wootton and John Porch for company.

A win for Andy Friend’s side would ensure they become the first team to beat all four South African sides, having already defeated the Bulls, Stormers and Lions.

A single match-point for Leinster against the second-placed Stormers will more or less secure top spot for Leo Cullen's side, who lost to the Sharks last weekend.

The South Africans have won their last six URC since losing 17-19 to Connacht in Galway at the end of February.

Stormers have not been defeated at home in the tournament since Lions visited DHL Stadium on 4 December.

John Dobson's men have faced Irish provinces on three previous occasions this season, losing at Munster and Connacht but beating Ulster in Cape Town on 26 March and this is the first ever meeting of the two teams.

Cullen has opted to rotate the squad, introducing many of the 31-man touring panel who didn't feature in last week’s contest with academy scrum-half Cormac Foley making his first start for the province on his fourth appearance, partnered in the half-backs by Ciarán Frawley.

Outside them in midfield, Rory O’Loughlin shifts from the wing to centre while Jamie Osborne holds on to the number 13 shirt.

Max O’Reilly comes in at full-back where he is flanked by Adam Byrne and fellow Academy man Rob Russell.

Up front, John McKee and Thomas Clarkson remain where they are joined by Ed Byrne in the loosehead position.

Rhys Ruddock captains the side from number 8 with Alex Soroka and Scott Penny completing the back row.

Dan McFarland's Ulster face a trip to Scotland off the back of two dispiriting losses, to Toulouse and Munster, and need a win to bolster their top-four chances, thus avoiding an away quarter-final.

Mike Blair's men have achieved just three victories over Irish provinces since November 2019, but all three wins were against Connacht.

Ulster have lost their last three URC matches and excluding unplayed fixtures have not lost four in a row in the Championship since 2011.

The 2006 champions have won their last six matches against Scottish opponents since Glasgow beat them 50-20 at Scotstoun in the URC semi-final in May 2019.

Ulster have won their last six matches against Edinburgh since the Scotsmen's 17-16 victory in Belfast in February 2018.

McFarland has made a positional switch in the back-three with Mike Lowry moving to full-back, joining wingers Rob Baloucoune and Ethan McIlroy.

The midfield duo of Stuart McCloskey and James Hume have been retained. Billy Burns returns from injury to start at out-half, alongside Nathan Doak at scrum-half.

Tighthead prop Gareth Milasinovich comes into the front row to pack down with Andrew Warwick at loosehead and Rob Herring at hooker.

Iain Henderson will skipper the Ulster men and is joined by Kieran Treadwell in the engine room. Marcus Rea and Duane Vermeulen return to the side at blindside and number 8, with Nick Timoney making a positional switch to openside flanker.