He's reluctant to admit he's playing the best rugby of his career, but Finlay Bealham will concede he's never enjoyed the game more than he is now.

The 30-year-old has long been a cult hero for Connacht fans, but in the last two seasons he's started catching the eye of the wider Irish rugby audience a bit more, not least for his instantly recognisable gameday braids in his hair.

His rugby is also standing out, and Ireland head coach Andy Farrell is noticing. Having made his Ireland debut in 2016, the versatile prop has earned 23 Test caps, with 14 of those coming in the last 18 months.

Andrew Porter's switch across the scrum has also opened the door for him at tighthead, and he's grasped the opportunity with both hands, playing all five games in this year's Six Nations, and featuring in 10 of Ireland's last 11 matches.

The 2022 championship also gave way to his finest moment in an Ireland shirt as he scored the the fourth try in their bonus-point win away to England at Twickenham, following which he had an emotional reunion with his parents, who he was seeing for the first time since before the start of the Covid-19 pandemic.

When pushed on what's led to him enjoying the game so much, he admits it's a combination of factors.

"I was going to say I'm another year older and another year wiser, but I don't know about the wiser bit," he laughs.

"I just really enjoy the environment that Friendy (Andy Friend) and the coaches have created and I just relish how I can be myself.

"One of the best bits of advice I've got is to just be yourself and relish it. It's what I try to do day-in and day-out, and try and bring that energy to the lads and enjoy the work.

"I've been really fortunate to be involved with Ireland in the last 18 months, and a lot of that has come down to how I've been preparing and my attitude. I suppose, I'm more of an older leader in the squad now.

"I'm enjoying it the most that I have, in terms of coming in every day and having a smile on me face, having the craic with the lads and enjoying the process.

"I've been fortunate to get a few Ireland caps in the last 12-18 months which is obviously brilliant and a massive honour. I play my best rugby when I'm enjoying it.

"If I was stiff and nervous and in my shell I probably wouldn't play so good, but I'm a lot more confident in myself that I can really express my character in the group. If that can translate to good performances, and give an edge to the boys it's brilliant."

The Connacht prop will lock horns with his international teammates this Friday night once again, when the sides meet in the second leg of their Heineken Champions Cup last 16 tie at the Aviva Stadium.

Leinster will be heavy favourites to build on their 26-21 aggregate lead and advance to the quarter finals where either Leicester Tigers or Clermont Auvergne will await in the last eight.

And Leo Cullen's side will also likely be boosted by a number of internationals returning from injury, with Andrew Porter and Ronan Kelleher both fully fit after respective ankle and shoulder issues picked up in the Six Nations.

"I can't wait, it's going to be good craic on Friday night.

"I know they have a few front row boys returning. Obviously, they had us under the pump a bit last week in the set piece and we've worked on those, but they have some boys coming back and it'll be a tasty encounter, and one I'm looking forward to.

"We need to be another level better, and that's in all areas of our game, defensively, set piece and in attack we have to bring it to another level. We have to meet fire with fire," he added.

"They're 15 blokes, just like us. We know they're going to be really well prepared and be up for it so we had to match that, and meet fire with fire.

"The big thing in those games, you want to play the game and not the occasion. The occasion was massive for Connacht Rugby [in the first leg], it was a European knockout game at home, full crowd, a big, big occasion, but it was just about playing the game." 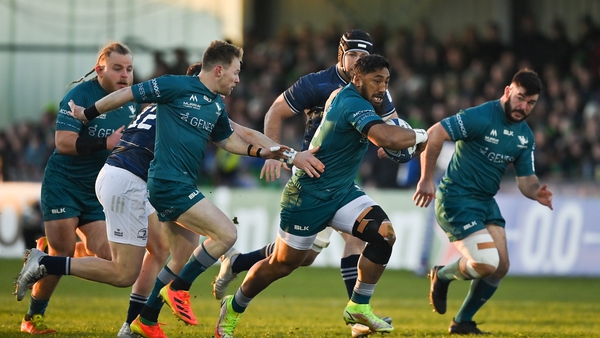