The last 16 of the Heineken Champions Cup promised drama, and it delivered in spades.

Connacht and Leinster served up a classic at the Sportsground, and they will do it all over again next week.

Leo Cullen's side will still be overwhelming favourites to reach the quarter finals, their 26-21 victory in tonight's first leg giving them a deserved lead to bring back to next week's return tie at the Aviva Stadium.

But Connacht won't need to come back from the dead on Good Friday, with Andy Friend's side very much alive after a brave and hugely physical display.

When Leinster won 45-8 at this ground two weeks ago it was a game played out by two shadow squads, one of whom had 14 men for the vast majority.

But tonight the Six Nations stars were back on both sides, and were the beating heart of an absorbing game.

For Connacht, Bundee Aki was immense, his mere presence on the pitch seemingly getting an extra few percent out of his teammates. It was his pass that created space for John Porch's early try to settle the home team's nerves.

Mack Hansen was also electric, his international experiences somehow giving him even more confidence than he had just a few months ago.

For Leinster, James Lowe and Hugo Keenan combined for two tries, before Keenan crossed for the third.

And it was the depth of Leinster's experience that saw them through, turning the screw on the Connacht scrum in the second half, while the relentless engine of both Josh van der Flier and Player of the Match Caelan Doris proved a difference maker in open play.

Before the game even started, the Sportsground was croaking under the weight and sound of 8,129 screaming supporters, and the Clan Terrace was shaking inside two minutes as Connacht started hot.

Bundee Aki got them into the 22 initially with a driving crash ball after 45 seconds, and while Leinster won the possession back with an excellent counter ruck a few phases later, the home side reclaimed it immediately, Leva Fifita charging down Lowe's attempted clearance.

Porch gathered the looseball - a few phases later he was diving over the line. 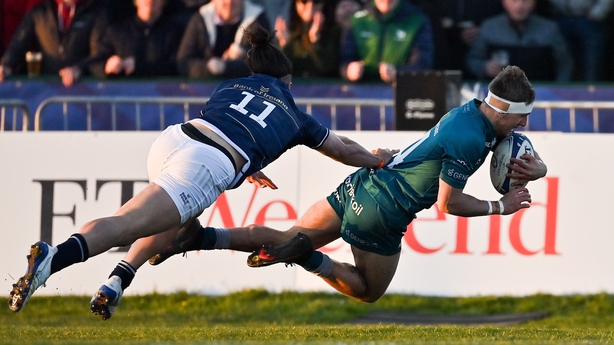 Again Connacht fed Aki, but this time the Ireland international passed before the tackle, having committed the Leinster defence. He popped to his left to Carty who had Porch charging over his shoulder, and the Australian went straight through the gap, sprinting to the tryline from the edge of the 22, for the early score Connacht so craved.

It was Aki's first game in a Connacht shirt since January, and his stamp was present on everything in the first quarter.

On 13 minutes he levelled Conan with a ferocious tackle, and while Leinster won a penalty off the following phase it was Aki who pounced on Dan Sheehan to take a penalty right back.

By now Leinster had settled, and it wasn't long before they were back in the 22. On 18 minutes, Aki was again a central figure, not rolling away at the breakdown to give Sexton the easiest of tap-over penalties, getting them off the mark and cut the lead to 5-3.

It was simple, ruthless rugby, working their way from the left touchline to the right, before Hugo Keenan ran at the outside of the defensive line. He passed back inside to Lowe, whose diagonal line against the grain sent him straight under the posts from 50 metres out, Sexton converting to make it 10-5 to the four-time champions. 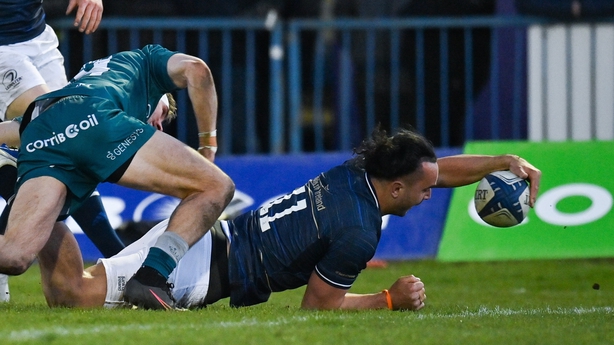 Within three minutes, Lowe had his second, and once more Keenan was the provider. Lowe started it and finished it, his deft, delayed pass to Keenan sent the full-back through a gap from beyond 40 metres, and from there it was simple hands, Keenan drawing in the last defender before passing to Lowe who dived over to score.

Sexton missed the conversion, leaving it 15-5, but Connacht cut that back to 15-8 on 33 minutes with a Carty penalty, gaining the territory after an outrageous chip-and-chase by Mack Hansen.

But having stemmed the bleeding, Connacht handed Leinster three points back almost immediately, and it could have been even more had Aki not made a try-saving tackle on Luke McGrath who intercepted Tom Farrell's pass. It led to the Leinster penalty, and a Sexton tap over to make it 18-8.

Again, Connacht came back for more though, and they got their reward as the clock hit 40 minutes. Cian Healy was penalised at the breakdown, and Carty floated a long range kick between the posts.

That penalty made it 18-11 to Leinster at the break, Leo Cullen's side having cut the hosts apart for their two tries, but Connacht still alive. 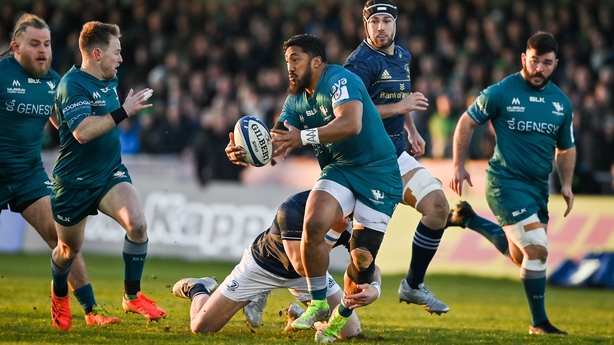 The home side needed a fast start in the second half, and it looked like they had it when Conor Oliver and Aki combined to slice their way into Leinster's 22 within a couple of minutes of the restart. It eventually led to a Connacht penalty which, after a few moments of deliberation, Carty opted to kick at the posts.

His third penalty of the day made it 18-14, but within seconds Leinster had them camped under their posts. Straight from the restart Jimmy O'Brien blocked Farrell's clearance kick, with Carty driven over his own line to force a five metre scrum.

Their pack went to work on Connacht's setpiece, and it led to Lowe diving in for his hattrick. However, after a TMO check it was crossed off, McGrath having knocked on at the base of the scrum.

While the try was ruled out, it was only a stay of execution for Connacht, with referee Karl Dickson returning for the penalty he'd been playing advantage for. After a further scrum penalty, they got the third try, Gibson-Park breaking down the blindside and passing to the onrushing Keenan, who crashed his way over the line. Once more Sexton was wide with the conversion, but Leinster were now nine clear at 23-14.

On 56 minutes we had the first real moment of controversy as Gibson-Park was yellow carded for a dangerous tackle on his opposite scrumhalf Marmion. The Leinster man stood upright in the tackle and connected with Marmion's head. However, despite leaving the Connacht man with a bloody nose, referee Dickson and his officials determined there was not a high degree of danger, which kept it from being a red card. 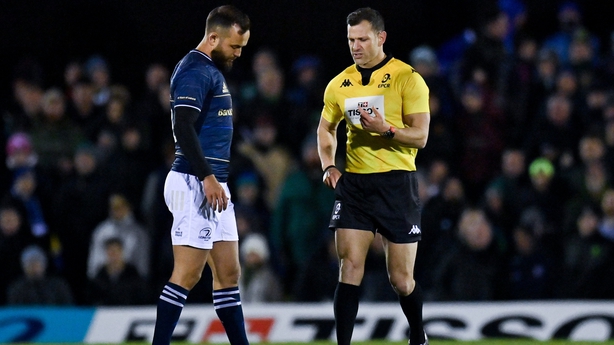 Sensing an opportunity, Connacht pounced, and after kicking deep into the Leinster 22, they eventually barged their way over through the Tongan lock Fifita, and when Carty slotted the conversion it was just a two-point game at 23-21, with 20 minutes left to play.

The home side were rocking again and almost got in for another try moments later, Oisin Dowling knocking on as he desperately reached for the tryline.

A similar fate befell Leinster's James Tracy on 71 minutes, but by then Leinster were back to a full compliment of 15 players and playing the game in the right areas.

Eventually they ground out a penalty in front of the posts, and Ross Byrne took the sensible option and called for the tee, giving the visitors some breathing room at 26-21.

With a second leg to come, and just three minutes left on the clock, both sides played for the final bell, which arrived after Van der Flier was bundled into touch by Sammy Arnold.

Full-time was just half-time though, Leinster leading by five ahead of the Good Friday rematch. 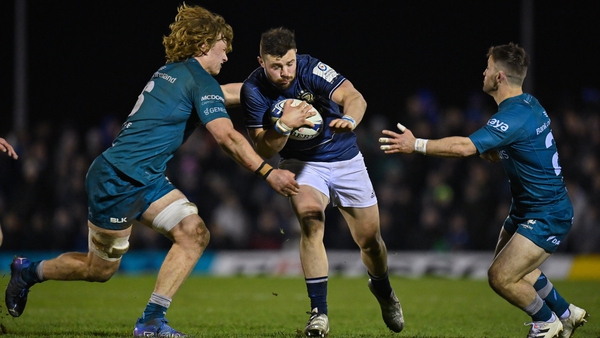